Every now and then, I take time out from researching critical topics such as health, athletic performance and longevity to tackle the issues that really matter. And so do French researchers, judging by some research recently sent my way.

Nicolas Gueguen and his assistants from the Universite´ de Bretagne-Sud in France, pondered an issue that has troubled great minds for millennia: Do men really have an evolutionary hard-wired preference for well-endowed women, or is this just a baseless myth promulgated by the folks who produce beer commercials and Snap-On® calendars?

Being the meticulous professionals they were, they didn't rely on hearsay, the dubious claims of self-proclaimed 'breast gurus', or the opinions of clueless Internet forum participants. Instead, Gueguen and his helpers did what any good research group would do: they headed out into the field to test the hypothesis under controlled conditions.

In the first experiment, a 20-year-old female sat in a nightclub located in an area popular with young tourists. She was selected for the experiment because male students rated her physical attractiveness as "average" and because she usually wore an ‘‘A’’ cup bra, the smallest cup size in France. This allowed researchers to create three different experimental conditions by modifying the size of her bra cup: "A" cup, ‘‘B’’ cup (average cup size in France) and a ‘‘C’’ cup (bigger than average cup size).

Except for the type of bra used, the 20-year-old decoy wore the same clothes: a pair of neat jeans, light-coloured sneakers and a white figure-hugging sweatshirt that highlighted her bust.

The young lady was instructed to sit in the nightclub by herself for an hour and to not make eye contact with any of the guys. An inconspicuous observer watched her and noted the number of men who approached her.  Whenever a man made contact with her, she told him she was waiting for her boyfriend, a strategy which previous research had shown to be an effective method for immediately ending the interaction.

In the first experiment, 13 guys approached the girl when she was wearing an A cup and 19 approached when she sported a B cup. When she donned the C cup, the number of approaches jumped markedly; 44 blokes hoping for a little holiday action went over to talk to her.

In the second experiment, 5, 9 and 16 guys approached her in the A, B, and C cup conditions, respectively.

And yes, the results were statistically significant.

In another experiment, the same girl stood by the side of a road and held her thumb out in the universal hitchhiking gesture. Hitchhiking is legal in France and, according to one previous study, 78% of French people have hitchhiked (they must be a very trusting lot in France). To help guard against any scary situations, a male observer hid 30 meters from where the girl stood; his assistance was not required during the experiment (replicating this study in the USA or Australia would likely demand armed SWAT officers and high speed pursuit vehicles, and their assistance probably would be required).

Anyway, each time 100 cars had passed, the girl changed her bra size. Two observers sat in a car 500 meters behind counting the number of motorists that stopped. Because the "I'm waiting for my boyfriend" line wouldn't have made much sense in this scenario, the girl instead told the motorists she was conducting an experiment on hitchhiking and thanked them for their help.

When the results were tallied, 14.92% and 17.79% of passing motorists stopped to offer a lift when the girl was wearing the A and B cup bras, respectively. When she wore the C cup bra, 24% of passing motorists pulled over to offer a ride. The difference between the A and C bras was statistically significant. The extra ride offers all came from men; altering bra cup size made no difference in the number of female motorists who pulled over. 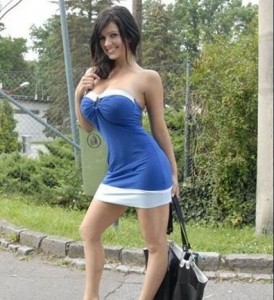 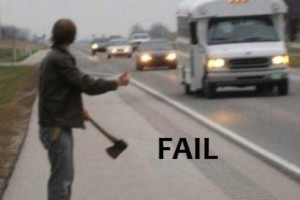 Other methods didn't work so well.

Don't Blame Men, it's in their Genes

These are hardly the first studies to indicate a male preference for larger breasts, although they are the first, to this author's knowledge, to test this preference in the field in such a controlled manner. Previous research has found men value physical attractiveness more than women (it's worth remembering women don't score so well on the shallowness scale either, with financial prospects and social status of potential male suitors receiving similarly high priority. Yes, evolution has seen to it that both males and females have evolved to be quite superficial).

From an evolutionary perspective, the male is under pressure to disseminate his genes. Men may have thus evolved to seek partners that maximize their chances of gene transmission, in the same way that females appear to have evolved with a preference for partners with higher status to maximize the survival and replication prospects of both themselves and their offspring. The researchers postulate that large breasts attract males at a subconscious level because they are considered a highly feminine trait and perceived as a sign of fertility.

Addendum: Shortly after I originally posted this article, I received an email from a female reader claiming to have small breasts. It was clear from the very angry tone of her email the article had triggered feelings of inadequacy.

This article is not meant to trigger feelings of inadequacy in anyone. Its intention was to report, in a somewhat lighthearted manner, the findings reported in peer-reviewed, published scientific research. The purpose of good science is not to reinforce what we wish were true, but to test the veracity of a hypothesis without fear or favour. By unleashing a barrage of vitriol upon yours truly, the aforementioned reader was succumbing to shoot-the-messenger syndrome.

She was also displaying an inability to view these results in their proper context. The study found that, all things being equal, women with bigger breasts will attract more attention from males. But in real life, all things are not equal. Breast size in women (and pectoral size/shape in men) is but one of numerous physical factors that can greatly influence attraction. These include, to name but a few, waist:hip ratio, bodyfat percentage and distribution, skin tone, complexion, facial symmetry, height, posture, muscularity, grooming and hygiene. Some of these factors we have little control over, others we can alter markedly with varying degrees of effort. To quote the Serenity Prayer, "grant me the serenity to accept the things I cannot change, courage to change the things I can, and wisdom to know the difference."