Readers may remember my post on Slow Burn author and low-carb shill Fred Hahn from a while back. Fred's an interesting case study in Internet fanaticism - his name pops up all over the web on forums and the comments sections of blogs. Fred clearly has a lot of spare time on his hands, and instead of spending it on important things like training, travel, family, friends and females, he evidently sits at his computer scouring the web for any opportunity to start an argument. And when the Super-Slow Super-Troll invariably gets his cyber-butt kicked by those he has provoked, he complains his opponents aren't allowing him to explain himself properly. Yep, apparently his fellow forum participants, often sitting thousands of miles away, possess some magical extra-sensory ability to block him from tapping coherent and science-backed answers into his keyboard. 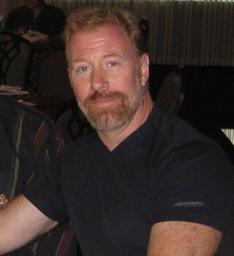 Fred Hahn: Coming Soon to a Blog Comments Section Near You

Fred tried this very stunt with me on my forum a few years back; when I tired of his nonsense and issued Fred with an ultimatum to start behaving himself and present actual scientific evidence to back up his untenable claims, or get booted off the forum, Fred threw a hissy fit, called me names, and accused me of taking steroids (I challenged Fred to put his money where his mouth was and pay for drug testing; no response).

The whole experience obviously left Fred deeply scarred; to this day, he still harbors a seething anti-Colpo hatred and bad mouths me any chance he gets.

Get a girlfriend Fred, you'll feel better in the morning.

Getting back to the steroid thing - as far as I'm concerned, whether someone uses the gear is entirely their own business, but I find it interesting that Furious Fred used a similar tactic on HIT author Brian Johnston years back when Johnston pointed out Fred's pitiful physical development. Yep, in Fred's world, anyone with a better build than him must clearly be juiced to the gills; heaven forbid he ever consider that, gear or no gear, maybe his training methods just plain suck.

To help Fred understand just why his training methods are so terrible, and why they are stopping him from achieving a decent physique, Matt Schoeneberger M.S. & Jeff Thiboutot M.S. have ever-so-charitably reviewed his awful book Slow Burn Fitness Revolution. And instead of a heartfelt "thank you", Fred is now attacking Matt and Jeff.

Slow Burn, which Hahn co-authored with Mary Dan Eades and that other stalwart of truth and honesty (cough, cough), Michael Eades, makes a number of claims that are not only untenable but downright ridiculous.

According to Hahn and the Eadeses:

"Slow Burn is a form of exercise that has been shown to provide all the benefits you seek from an exercise regime in only thirty minutes per week, with negligible risk of injury”;

“First, slow-motion strength training builds muscle better than any other type of training”

Right. That would explain why the authors themselves are such flagship specimens for the program.

“Studies have shown that subjects following a slow-speed strength-training regimen achieved 50 to 100 percent greater strength gains than those in a traditional weight-lifting program."

Yeah, sure. That's why national weightlifting and powerlifting teams the world over continue to train with conventional tempos. Yeah, they could double their strength gains by switching to super slow...but winning isn't everything, right?

The bollocks reach fever pitch when the authors write:

“…if I were to then tell them that thirty minutes a week doing a Slow Burn workout will give them as much endurance as three hours of jogging, they would probably treat you like the village idiot and quickly move away. Strange though it seems, your unlikely claim would be true”

“The Slow Burn strength-training regimen will give you greater general cardiopulmonary fitness and endurance than running".

The authors, by the way, do not provide a single reference for any of these stunning claims, despite the fact that citation lists are a standard inclusion in non-fiction diet and health books these days.

When Matt and Jeff point this out, Fred replies:

“First, the editor of our book chose NOT to put a bibliography in the book. She also did not want too many technical references. She also felt that since two physicians were writing the book, this was authority enough.”

Heaven help us. Now you know why I have such a low opinion of most mainstream publishers and the popular format pap they produce. Evidently, valid scientific references are far too "technical" for their apparently stupid readership; far better to go with the "appeal to authority" phenomenon:

"Who needs citations?! Two of the authors have some fancy-sounding initials after their names! Yep, that more than makes up for the complete lack of scientific support for the absurd statements made in the book!"

To make matters worse, one of the physician authors in whose "authority" we should blindly trust has been well documented to play fast and loose with the truth:

I could go on...and on, and on, but Matt and Jeff have already done a sterling job of debunking the ridiculous claims in Slow Burn. Slow-tempo training has never really caught on in the strength training mainstream (a direct reflection of its inefficacy) and is falling further out of favor with the recent interest in explosive- and speed-oriented training. But if, in a momentary lapse of sanity, you ever find yourself reading an Internet article by some super-slow "guru" and are tempted to see how making like a snail can benefit your muscle and strength gains, then be sure to give Matt and Jeff's review a thorough read.

The review is actually spread over two posts;

and is also available in PDF form, but I'd recommend reading the original blog posts above where you'll also be privy to Fred's responses in the comments section - they provide a rather revealing insight into the slow-one's mindset.

Also, here's a link to a post in which Matt and Jeff highlight Fred's blatant hypocrisy when it comes to personal attacks:

As I stated in another post this week, many in the low-carb camp seem to think it's perfectly OK to dump all over others, but quickly go bonkers when they are on the receiving end of unflattering commentary. According to Jeff, low-carb researcher Richard Feinman withdrew his endorsement of their "SPEED" book after they posted their critical review of Slow Burn. Apparently the review, which I found pretty damn tame in its tone and language, was a little too harsh for Richard. "I at least try to maintain a collegial approach with people whose ideas I disagree with", protests Feinman. Note to Richard; if you don't like people who get all ad hominem on their opponents, then you really need to have a chat with your boy Fred.

A Note to Matt and Jeff:

Fellas, I love the review but...I have a bone to pick with you guys. You need to do something about your claim that SPEED is “the only weight loss book worth reading!”

At the very least, you should change it to "one of only two weight loss books worth reading!"... 🙂

Anthony Colpo is an independent researcher, physical conditioning specialist, and author of the groundbreaking books The Fat Loss Bible and The Great Cholesterol Con. For more information, visit TheFatLossBible.net or TheGreatCholesterolCon.com