In 2007, French cycling company Look released it's first mountain bike pedal, called "Quartz". They should have called it "Merde" (French for "Shit").

LOOK is a French company that started making ski equipment in 1951. In the early 1980s, the company turned its attention to the world of cycling, and in the mid-80s released the first clipless road cycling pedal.

The 3-bolt cleat system that Look pioneered has become the de facto standard for road cycling, to the point where virtually all road shoes now come pre-drilled with the 3-hole pattern in their soles. The 3-bolt system has also been adopted by other major pedal manufacturers including Shimano, Xpedo and Time.

In contrast, Look's foray into mountain bike pedals is a much more recent - and regrettable - endeavour. In 2007, Look released the Quartz pedal, which it dropped after 5 years and replaced it with the S-Track. The Quartz is a substandard pedal, and Look knows it.

Why These Pedals Suck

In 2014, I bought two pairs of Look Quartz mountain bike pedals from private eBay sellers located in the USA. Both pairs were new. One pair still hasn't been used - a blessing, as you'll soon learn - and remains in its original box. That box is marked with "09", which I assume is the year of manufacture.

The other pair was fitted to a cyclocross bike that, until earlier this year, had very little use. I no longer have the box for that pair, and the pedals themselves contain no date markings.

That pair had only traveled around 400km before something rather unsettling happened. On January 5 of this year, I went for a ride on my CX bike in the hills and was making my away along a narrow asphalt road when, with no warning, my right shoe simply popped out of the pedal. I was shocked - in all my years of cycling I've never had any of my my shoes accidentally disengage from any of the various clipless pedal systems I've used.

Thankfully I wasn't pedaling particularly hard or fast at the time, so my balance wasn't upset to any real degree. However, there was a car close behind me at the time, and I shudder to think what might have transpired had I been out of the saddle and pedaling hard. 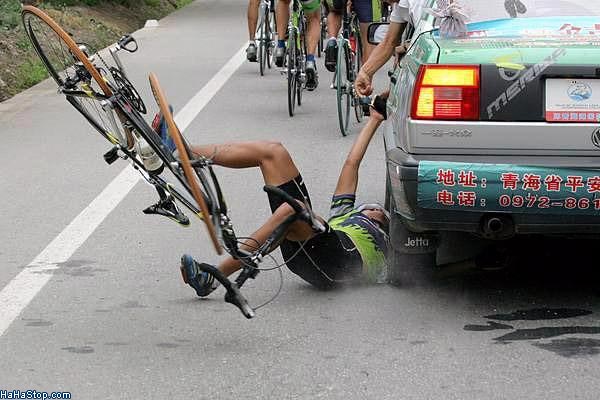 Hitting the deck with a car in close proximity: NOT RECOMMENDED.

, where you simply bolt the cleats on with no fuss, in the case of the Quartz you have to attach the prescribed number of cleat shims, then systematically remove each one if need be until optimal engagement occurs).

So when I got home, I started searching online for reviews of Look Quartz pedals to see if this had happened to anyone else. Sure enough, I quickly found scores of negative reviews on the Internet posted by people whose shoes also accidentally detached from their Quartz pedals. Needless to say, I promptly removed the pedals from my bike and the accompanying cleats from my shoes.

Here's a smattering of negative reviews of Look Quartz pedals from MTB Reviews: 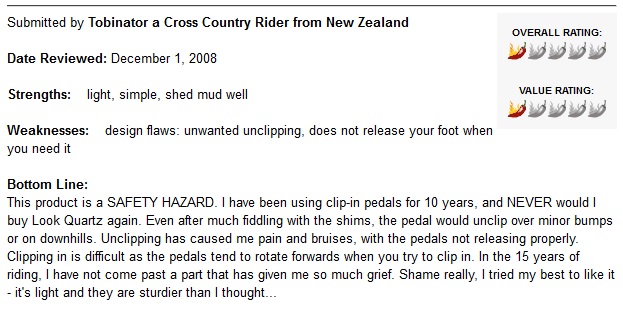 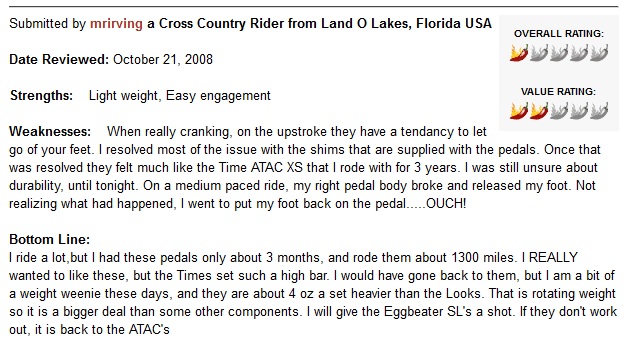 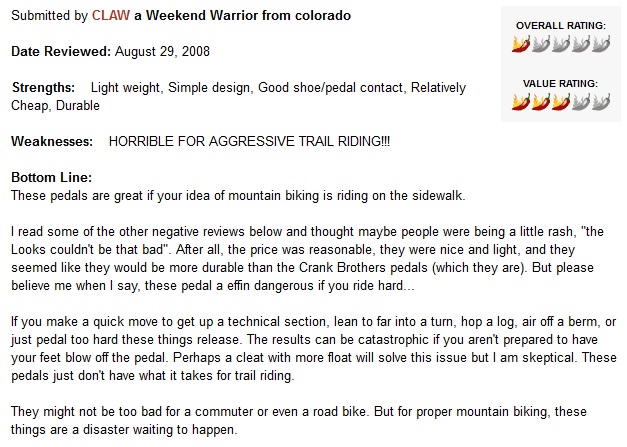 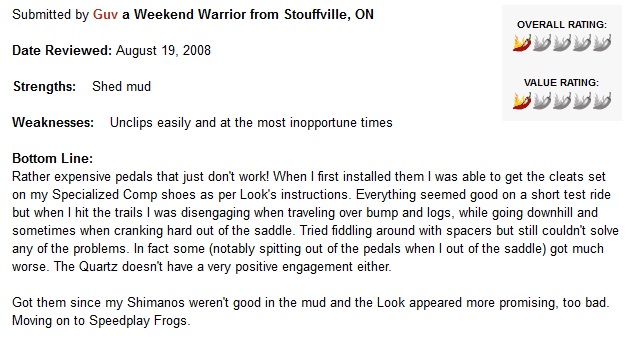 And from MTBR readers in response to articles on the Quartz and newer S-Track pedals: 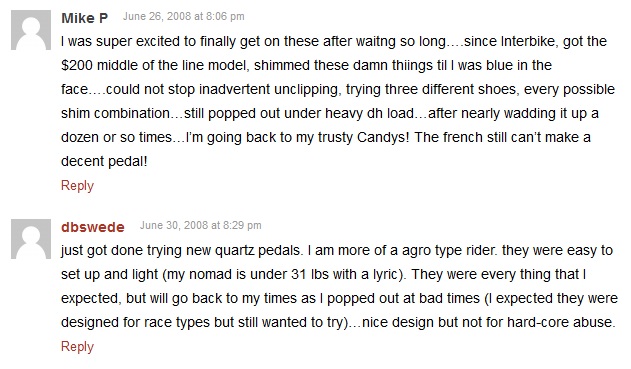 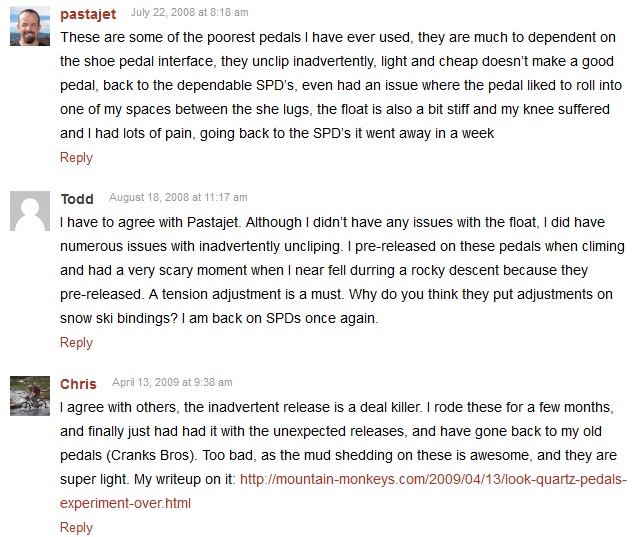 I think it's fair to say these pedals suck, and big time. No wonder Look quietly dropped them from their line-up.

The trouble is, Look has also adopted the out-of-sight, out-of-mind approach to the unfortunate riders who purchased these garbage pedals. There are still dealers out there selling new-old-stock Quartz pedals, and the company has never issued any public warning or statement about the safety risks posed by these pedals. And it certainly has not established any refund or replacement (with a non-dangerous product) scheme for riders who rightly believe their safety is paramount and don't want to risk eating dirt, tarmac or motor vehicle panels as a result of these appalling pedals.

On January 6, I lodged a complaint about these pedals at the ACCC's Product Safety Australia website. On January 9, I received an email back from the ACCC saying:

"We have recorded your report and sent it to our Product Safety Branch for its assessment. But they will only contact you if they need further information. We appreciate you taking the time to report this matter to us. Reports like yours help us prevent avoidable injuries."

After years of dealing with government bureaucracies, I've learned this kind of waffle is code for:

"We will probably do nothing about these pedals."

I'd be absolutely delighted to be proved wrong, but I won't be holding my breath.

As for getting some recompense for the hard-earned money I shelled out for these junk pedals, the ACCC is basically powerless to act when something has been purchased overseas.

Having drawn a blank with the ACCC, I figured I'd appeal to the goodwill of Look's Australian distributor, an outfit that trades as Groupe Sportif. On January 12, I emailed Groupe Sportif and relayed my negative Quartz experience. On January 17, I received an email back from their Brand Manager, one Don Mitchell.

Mitchell's response, quite frankly, wasn't at all helpful. He wrote:

"Even though you have purchased these pedals overseas, the seller has obligations to you."

No, they don't. There may be such "obligations" if the item was purchased from an online bike store, but I clearly stated in the email I sent to Groupe Sportif that both sets of Quartz pedals were purchased on eBay USA. In 2014, the only obligation an eBay seller had was to reply to a complaint from a buyer that was made within 45 days of purchase (and paid for via PayPal). If no resolution was achieved between buyer and seller, then the buyer could ask PayPal to step in and adjudicate.

Needless to say, it was literally years too late to employ that course of action. And quite frankly, I don't think it would've been appropriate anyway, because the central issue is a potentially dangerous product design flaw - the ultimate responsibility for which lies with Look, not a couple of private sellers on eBay USA.

Mr. Mitchell's reply then suggested I visit the ACCC website for information on my refund rights, despite the fact I had clearly stated in my email that I'd already contacted the ACCC!

Clearly, Groupe Sportif was giving me the brush-off.

So on January 19, I figured I'd email Look in France. As with my correspondence to the ACCC and Groupe Sportif, I recounted my worrying experience, and shared the negative reviews I'd found online. I also asked them to stand behind their product. My message concluded:

"In 2008, Look had a recall on Keo pedals, and I took 2 pairs to a Melbourne bicycle shop to have the internals replaced free of charge. I have always had good experiences with Look road pedals.

I'm hoping you can do something regarding these Quartz pedals - perhaps you could authorize Groupe Sportif to issue either a refund or a replacement with some Look road pedals? I know the pedals were purchased in the US, but Look is a global brand and this is a safety issue. As it stands, these pedals are completely useless to me, and I cannot in good conscience sell them to anyone else.

I have attached photos of the used pedals that were removed from my bike, so you can see they were in no way abused or thrashed. There is also a photo of the new pedals in their box."

I'd love to share it with you, but as of February 19 - a full month later - I still haven't received one!

Look boasts on its website of having 420 staff, but evidently not one of them could be bothered replying to my concerns.

Perhaps that 2008 Keo recall was such a costly and unpleasant endeavour for Look, they have no intention of repeating the process with their Quartz pedals, despite the abundance of online reports about unintentional disengagement?

Whatever the reason for their non-response, I find it sad - if not infuriating - that neither Look nor their Australian distributor are prepared to stand behind their products.

I urge all riders to avoid the living daylights out of Look Quartz pedals, no matter what 'bargain' price you're offered. Substandard and dangerous junk is a rip-off at any price.

In fact, given their utter indifference to my complaint, I'll go even further and urge all riders to shun Look's road pedals also. I've been using Xpedo pedals on my road bikes for some time now, and they are brilliant. They do everything Look road pedals could dream of doing while being lighter and cheaper. I don't have a PhD in economics, but I'll confidently state that paying more for a heavier pedal that offers no advantage is not smart money management.

Meanwhile, the Ti-spindled Thrust XRF08CR weighs in at a super light 170 grams and can be picked up as cheaply as US $194.99 on Amazon

It seems they suck too, although in this case it appears durability - rather than surprise disengagement - is the problem. From the comments at MTBR's review of the S-Track pedals: 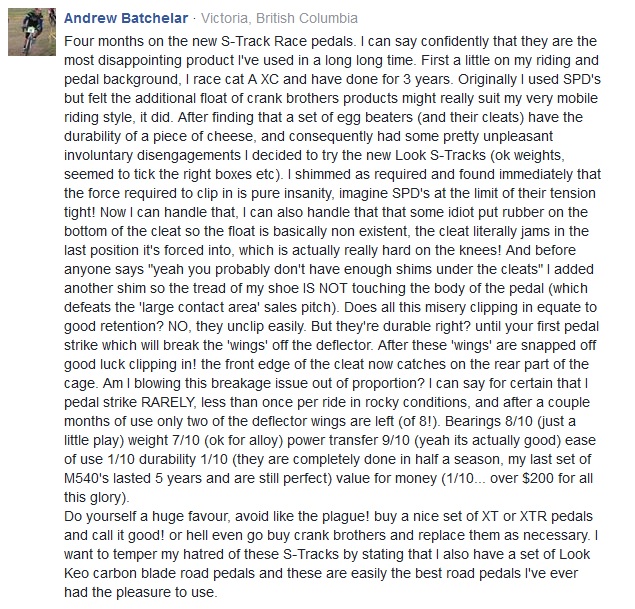 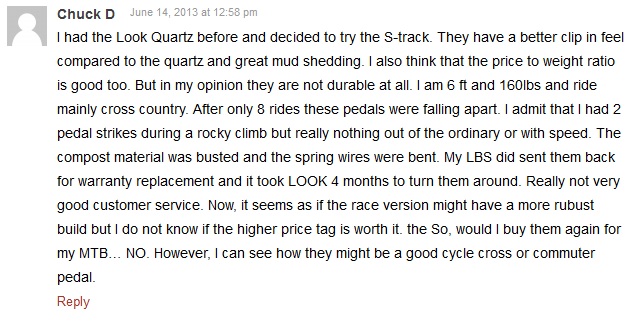 In closing, the Look Quartz is a dangerous, poorly designed pedal. A big fat thumbs down to Look for refusing to step up and make amends for releasing such an appalling product.

NOTE to Look Cycle International and any and all of its subsidiaries, affiliates, distributors, agents, outlets, dealers, etc, and Groupe Sportif: Because this is a public safety issue, AnthonyColpo.com and its contributors reserve the right to publicly share and reprint any correspondence from you and your legal representatives/counsel, including - but not limited to - demands for removal of this article or threats of legal action. The forwarding of any such correspondence constitutes implicit acceptance of these clearly elucidated conditions, irrespective of whatever privacy warnings/disclaimers said correspondence contains.