Ladies and gentleman, I know I shouldn't give this schmuck any more of my time, but cyber-loudmouth James Fell might finally have made a positive contribution to society by coming up with a new cure for insomnia!

He didn't mean to, of course. What he was trying to do is slander me with a new post that claims ... actually, I don't know what the guy is claiming. It's perhaps the most convoluted load of nonsense he's written yet, and that's really saying something.

He wanks on about 9/11 (!?), Bertrand Russell, and vaccinations, and - in a display of just how terribly desperate he is to discredit me, cites none other than vegan super-sleaze "Plant Positive". You can read all about that shonky paragon of pseudoscience at these links:

Why “PrimitiveNutrition” aka “Plant Positive” is a Shameless and Cowardly Liar

Yep, nothing like citing an anonymous liar to add credibility to your argument, James!

He derides the open-access Journal of American Physicians and Surgeons, which published an article of mine on LDL cholesterol back in 2005, but has absolutely nothing to say about the article itself. Hardly surprising, coming from such an authority-worshipping intellectual featherweight who grimaces at the very thought of having to read a journal article for himself. 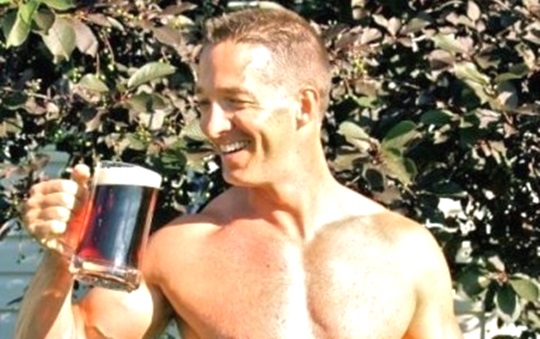 Instead, Fell resorts to yet another favoured smear tactic of sleazeballs worldwide: Guilt-by-association. Trouble is, there's nothing to be guilty of. The publisher of JPANDS, AAPS, could fairly be described as conservative in its political orientation (not exactly uncommon among physicians), which in turn has strongly raised the ire of its left-leaning critics. But such partisan grumblings have nothing to do with yours truly: I wrote an article not on politics, but on LDL cholesterol, and Fell can't rebut it to save his life.

By the way, if you want to access the article for free, you can do so right here:

You can also view criticism by two doctors of the article, and my reply at the link below (unlike Fell, JPANDS is transparent enough to air dissenting views and to allow the original author/s to respond):

A Critical Response to LDL Cholesterol: “Bad” Cholesterol or Bad Science?, and My Reply
(To view the correspondence, scroll down to Page 2 of the PDF; my response is on Page 3).

Fell's post also contains yet more ranting against "alternative medicine" (clearly a pathological obsession for this guy), some saucy cherry-picked quotes from our recent email exchange (he's too gutless and dishonest to reprint the whole thing in its entirety, like I did), but again absolutely no discussion whatsoever of the science behind mild adrenal insufficiency. Oh, he drops the names of some "adrenal fatigue" supplements sold by James Wilson, insinuating that the whole "adrenal fatigue" thing is a big money-making sham (never mind that yours truly has no financial interest in the concept whatsoever), but still no discussion of the science behind mild adrenal insufficiency.

Yep, mild adrenal insufficiency (a.k.a "adrenal fatigue" in some circles) is the reason the guy picked a fight with me in the first place - but now all of a sudden, after I returned fire with the science, he doesn't want to talk about it any more!

So apart from "I hate you Colpo and am desperately trying to tarnish your image as revenge for making me look like a complete tosser!", I truly have no idea what the idiot is trying to say.

(Note to James: I didn't make you look like such a complete tosser - you did).

His post is just one big, sniveling, long-winded load of drivel that merely serves to reinforce what a raving lunatic James Fell really is.

However, after only a couple of paragraphs, I started to realize a potentially powerful benefit of Fell's diatribe. As I was reading, I noticed I was being overcome with a very strong urge to ... sleep.

Boring, convoluted hogwash that wanks on and on about nothing in particular tends to have that effect on me.

So if you suffer from insomnia, you might want to see if it works for you too. Try reading the following right before bedtime - you may never need another sleeping pill again!

Oh, and to further reflect on just what an intellectual giant we're dealing with, here's Fell calling me "Mr. Anthony Colon-Polyp" in his most recent email: 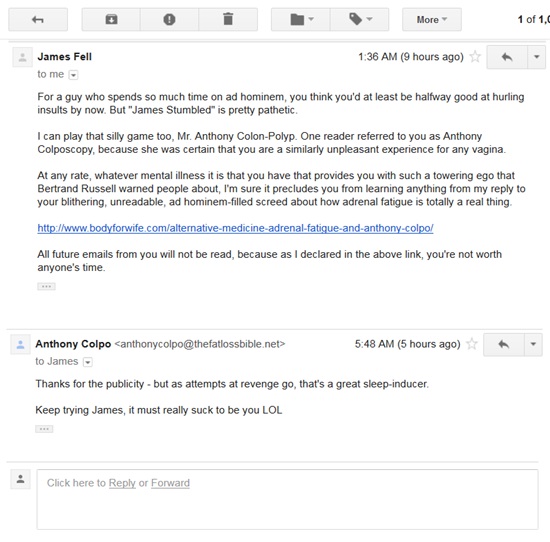 Judging by the amount of butt-hurt he's displaying, I think it's obvious who's really harbouring a potentially malignant colorectal condition ...

And as an indication of the intelligence of Fell's readership, there is indeed a comment on his Facebook page - by someone who's actually dumb enough to take him seriously - calling me "colposcopy". Apparently, I'm supposed to be hurt by this.

I guess some people just never made it past kindergarten ...

James Fell trying to be Paul Stanley, but instead looking just plain creepy and weird.

Poor James Fell. Low on facts, big on hate, and wouldn't know sound science if it crawled up his keester and grew into a giant-sized ... polyp.

Someone give the guy a handkerchief. And his crazy pills.