In 2006 I published my first book, a distinctly contrarian tome titled The Great Cholesterol Con. While purveyors of the nonsensical cholesterol theory of heart disease were none too pleased by the book's release, it has otherwise received a positive reception. It's heartening to see the book has a 4.6 out of 5 rating on Amazon. 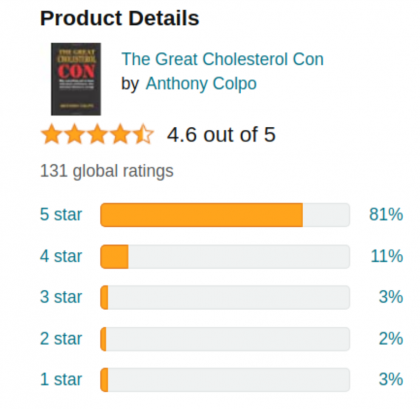 Recently, someone emailed me to let me know of a 1-star review that had been posted of the book on Amazon.com. While checking out this review, I noticed one other 1-star review. The former was posted in 2020 by someone using the pseudonym "Don's Thoughts on the Matter," the latter in 2014 by a vegan ideologue and sports scientist by the name of Sharon McDowell-Larsen, PhD.

It's a fact of life that, no matter the quality, whenever you offer your work for public consumption it is going to get attacked by someone. We authors have to grudgingly accept that, but what I can't accept is when people blatantly lie and rely on name-calling instead of science to discredit me and my writings.

Amazon no longer allows responses to product reviews on its website. As such, I'm posting my replies to the two aforementioned reviewers here.

It's All My Fault?

Dear Don (assuming that is your real name),

I'm sorry to hear you suffered a coronary event in 2020. Learning that someone who read my book went on to suffer such an outcome is disappointing, to say the least.

That said, smearing my book with a highly misleading review is not the way to make amends. Let's be honest here: You and I both know you did not follow the recommendations in my book. Of all the non-drug strategies I recommend to combat heart disease, you mention only exercise and weight loss. Is that it? That, and avoiding highly problematic lipid-lowering drugs, is all you took away from my book?

The Great Cholesterol Con is not a weight loss nor an exercise manual. It describes a multifaceted strategy for lowering your risk of heart disease involving not only exercise, but dietary modification, targeted nutritional supplementation, stress reduction and, what I consider most important of all, bodily iron reduction.

I make it quite clear at the beginning of the iron chapter I consider it to be possibly the most important in the entire book, and I urge readers to pay close attention. If we met, could you look me in the eye and honestly tell me you followed the recommendations in that chapter? If I asked you to show me your blood work confirming you checked your serum ferritin levels and subsequently lowered/maintained them within the suggested range, could you do so?

I think we both know the answer to that.

As Michel de Lorgeril (head researcher of the famed Lyon Diet-Heart Study) and a Japanese collaboration have pointed out, statin trials curiously stopped showing efficacy for these drugs around 2005. This just happens to coincide with more stringent regulations for clinical trials that came into force in the EU and US in 2004/2005 in response to the Vioxx scandal.

The sole exception was the farcical JUPITER trial, which was disingenuously halted early on 'ethical grounds.' The pharma-sponsored researchers claimed the drug group was experiencing a clear benefit, and that this would have been unfair to the control group. A look at the actual data shows the endpoint trajectory between the two groups was narrowing and on track to crossover in favor of the control group. So why do you think they really stopped the study?

You can call my criticism of statin drugs a "conspiracy theory," but it is based on a thorough appraisal of the clinical data and I believe the facts speak for themselves. I will also remind you that slurring someone by belittling their work as "conspiracy theory" instead of rebutting their arguments with scientifically verifiable counterpoints is a sign of intellectual impotence. Instead of deriding my work with ad hominem slurs, where is your scientific rebuttal to the points I make in the book?

Your review suggests you shunned the opportunity to have your arterial health assessed. Where in my book, exactly, do I recommend such a foolhardy strategy? To the contrary, my book contains a section recommending a number of diagnostic tests.

The fact that you suffered a cardiovascular event after (allegedly) reading my book and then largely ignoring its recommendations hardly constitutes a valid criticism of said book. Had you actually applied the recommendations in the book, things just may have turned out differently.

I also note from one of your other reviews that you previously suffered cancer. Common cancer treatments such as chemotherapy and radiotherapy are well known to raise subsequent risk of cardiovascular events. You also state that your coronary blockages had been progressing for 10 years, long before you allegedly read my book. I do not have knowledge of your full health history, but you clearly have a history of serious health issues. I submit they are not going to be rectified simply by taking a dubious class of drugs like statins.

In closing, I wrote The Great Cholesterol Con in good faith and after an extensive review of the evidence. The same cannot be said of your review.

I stand by my book, and if I were to rewrite it most of what is in the current version would reappear. Based on the research that has accumulated since I first wrote the book, my negative critical appraisal of statins would be even stronger.

no offense, but until I saw your review this morning, I had no idea who you were. A quick online search reveals you are a vegan dietary dogmatist, pushing the popular but patently false notion that dropping the most nutrient-dense staple from our diet (meat) will somehow improve human health. Just what you do for a crust nowadays isn't clear, because your ResearchGate page lists your "Current position" as "Former Head of Department" at the Center for Creative Leadership, Colorado Springs.

The Center for Creative Leadership bills itself as "a top-ranked, global, nonprofit provider of leadership development." Among the Center's ten essential traits of a good leader, it lists integrity, communication, "learning agility," and respect. I'm struggling to see how a dishonest individual like yourself, who relies on ad hominem snipes and logical fallacies instead of science to discredit those she dislikes, fits into this grandiose leadership scheme.

You kick off your review of my book with the following piece of slander:

"unfortunately Colpo is the con artist in this book. he misuses research and cherry picks." (sic)

In the textbook classic fashion of dogmatic malevolents, you fail to provide a single example of my alleged misuse and cherry-picking.

Your grammatically-challenged self then writes "there are no studies showing reversal of heart disease on a high cholesterol, high saturated fat diet... none."

Here we witness you employ another time-honored tactic of dishonest argument: The Strawman Argument.

Nowhere - I repeat, nowhere - in my book do I claim a "high cholesterol, high saturated fat diet" can reverse heart disease. What I do say is that there is nothing resembling good science to show that cholesterol and saturated fat cause heart disease. There is, however, abundant evidence to show that many of the anti-fat and anti-cholesterol recommendations made in the name of the lipid hypothesis can actually raise the risk of heart disease and stroke (and cancer). I present a very large volume of evidence to underline this reality, and you are clearly unable to refute any of it.

It is terribly unfortunate that a so-called "creative leader" like yourself (former or otherwise) is too intellectually dishonest to acknowledge the difference between causing something and curing something.

If someone says to you that wearing green t-shirts does not cause heart disease and stroke, they are telling you a simple fact that could be easily verified under controlled testing.

Sharon, like so many of your highly dogmatic 'plant-based' ilk, you cannot even begin to refute me on scientific grounds and instead must resort to personal slurs and Strawman arguments.

I'll let readers decide who the real "con artist" is... 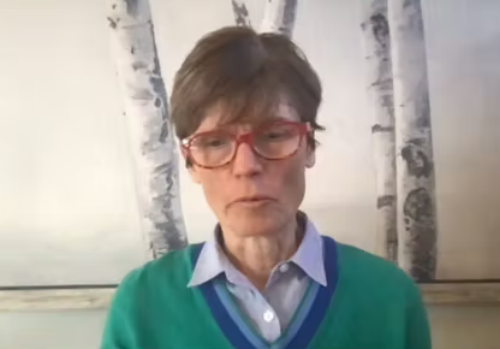 This site is self-funded and relies on reader generosity, so any and all tips are greatly appreciated.