As one of the most public faces of the COVID-19 con, Dr Anthony Fauci sure does spout a lot of pseudoscientific nonsense. But every now and then he drops an inconvenient truth, a huge clue as to what a complete sham the COVID-19 hysteria really is.

During a 7 April 2020 press briefing, for example, Fauci and fellow White House Coronavirus Task Force member Dr Deborah Birx confirmed the US was ascribing COVID-19 as the cause of death even when it was really caused by another condition.

Birx nonchalantly told reporters the US has "taken a very liberal approach to mortality."

"There are other countries," said Birx, "that if you had a pre-existing condition and let’s say the virus caused you to go to the ICU and then have a heart or kidney problem — some countries are recording that as a heart issue or a kidney issue and not a COVID-19 death."

As they should, and as was the normal practice prior to the dystopian COVID-19 era.

But that's not how it works in America, explained Birx, where "the intent is, right now, that those — if someone dies with COVID-19, we are counting that as a COVID-19 death."[Bold emphasis added] 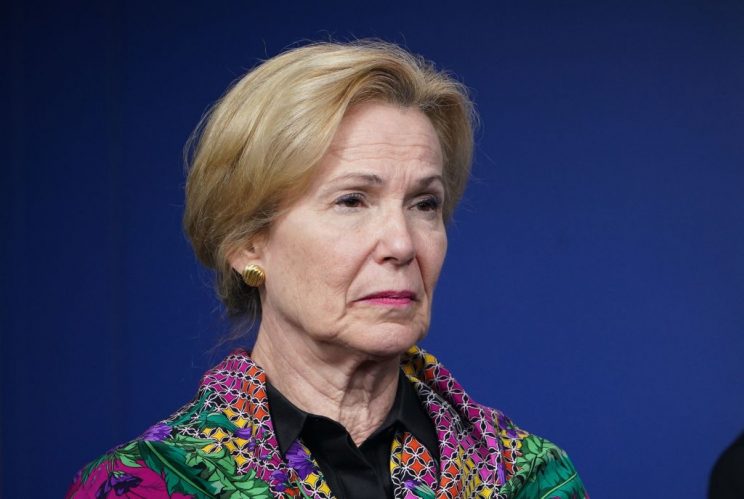 When a reporter queried the validity of this approach, Birx (above) fumbled for a coherent response, so Fauci quickly chimed in. Here’s what the ‘respected expert’ had to say in defense of the COVID-19 counting strategy:

“I think there’s so much focus now on coronavirus that … No, I can’t imagine if someone comes in with coronavirus, goes to an ICU, and they have an underlying heart condition and they die — they’re going to say, “Cause of death: heart attack.” I — I cannot see that — that happening. So I don’t think it’s going to be a problem.”

Fauci openly admitted that, thanks to the current COVID-19 hysteria, there is every chance a heart disease patient who dies of a heart attack while also allegedly having a coronavirus infection will misleadingly be listed as dying of COVID-19. And he proudly admits he doesn’t see this as a problem.

Despite this stunning revelation, the shambolic mainstream media continues to bombard us with fantasmagorical COVID-19 death counts. We are supposed to believe 260,000+ Americans have died from a largely asymptomatic influenza virus, when they most likely died from ailments like heart disease, stroke, cancer and kidney disease.

Not to mention the incorrect use of intubators.

So we know the COVID-19 death toll is being widely exaggerated. But were these people even infected with COVID-19, irrespective of their true cause of death?

And what about the continual barrage of daily reports listing new "cases"?

Turns out those figures are a load of bollocks too.

During a 16 July 2020 “This Week in Virology" podcast, Fauci was asked about the polymerase chain reaction (PCR) test that forms the bedrock of COVID-19 testing.

Before I share what he said, a quick word about polymerase chain reaction testing is in order.

The majority of COVID-19 testing taking place employs this PCR technology. These tests detect viral disease by looking for traces of the virus’ genetic material in samples most often collected via a nose or throat swab.

The sample is then subject to a process of "thermal cycling," in which a small sample of DNA is amplified to a quantity scientists can study in detail. Each cycle supposedly produces more target DNA for the lab scientists to study.

All things being equal, more cycles would mean more useful DNA material for scientists to analyze.

But that is not how it works in real life.

Fauci admitted the PCR COVID-19 test is useless and misleading when the test is run at “35 cycles or higher.” A positive result, indicating infection, should not be accepted or believed. As Fauci stated:

“…If you get a cycle threshold of 35 or more, the chances of it being replication-confident [i.e. accurate] are miniscule … you almost never can culture virus from a 37 threshold cycle, so I think if someone does come in with 37, 38, even 36, you gotta say, you know, it's just dead nucleotides, period.”

Any test with a cycle threshold above 35 is too sensitive, agreed Juliet Morrison, a virologist at the University of California, Riverside. “I’m shocked that people would think that 40 could represent a positive,” she told the New York Times.

Harvard epidemiologist Michael Mena said he would set the figure even lower, at 30 or less.

Health authorities around the world are allowing cycle thresholds over 35!

Which in turn dramatically increases the number of false COVID-19 positives.

The FDA, the bureaucracy that authorizes these tests for use in the US, recommends a cycle threshold of 40.

To make matters worse, the FDA has outsourced COVID-19 testing to at least ten Chinese companies. It bears reminding that China is America's primary geopolitical adversary and stands a lot to gain by inflating the severity of the COVID-19 issue in the US. Especially while Trump, the first Western politician to meaningfully stand up to the increasingly bellicose Chinese Communist Party, remains in power.

As Jordan Schachtel notes, and as Clive Hamilton details in his must-read tome The Silent Invasion, not only are Chinese corporations completely subservient to the state, they almost always have a CCP representative on their board. That CCP director, says Hamilton, wields more real power than the company's CEO.

It's not just Chinese companies that we need to worry about.

North Carolina’s state lab uses the Thermo Fisher coronavirus test, which automatically classifies results based on a cutoff of 37 cycles. A spokeswoman for the lab told the New York Times its testers did not have access to the precise numbers.

“It’s just kind of mind-blowing to me that people are not recording the C.T. values from all these tests — that they’re just returning a positive or a negative,” said Angela Rasmussen, a virologist at Columbia University in New York.

“It would be useful information to know if somebody’s positive, whether they have a high viral load or a low viral load,” she added.

In Massachusetts, 85-90 percent of people who tested positive in July with a cycle threshold of 40 would have been deemed negative with a Ct of 30, Dr. Mina said. “I would say that none of those people should be contact-traced, not one,” he said.

Other experts informed of these numbers were stunned. “I’m really shocked that it could be that high — the proportion of people with high C.T. value results,” said Dr. Ashish Jha, director of the Harvard Global Health Institute. “Boy, does it really change the way we need to be thinking about testing.”

The number of people with positive results who aren’t infectious is particularly concerning, said Scott Becker, executive director of the Association of Public Health Laboratories. “That worries me a lot, just because it’s so high,” he said, adding that the organization intended to meet with Dr. Mina to discuss the issue.

Meanwhile, a report prepared by the Doherty Institute for the Therapeutic Goods Administration (Australia's equivalent of the FDA) and the so-called Office of Health Protection stipulates a cycle threshold of 38.

The Lisbon court of Appeal recently upheld a lower court decision to declare unlawful the quarantining of four persons, one of whom had tested positive for COVID-19 using a PCR test. In doing so, the court made a number of observations about PCR tests. Citing a study by Jaafar et al, the court concluded “if someone is tested by PCR as positive when a threshold of 35 cycles or higher is used (as is the rule in most laboratories in Europe and the US), the probability that said person is infected is <3%, and the probability that said result is a false positive is 97%.”

The Jaafar et al study was published on 28 September 2020 in the journal Clinical Infectious Diseases. The French researchers found at a cycle threshold of 25, up to 70% of patients remained positive for COVID-19 in culture and that at a Ct of 30 this value dropped to 20%. At a Ct of 35, the false positive rate was a whopping 97%.

Their findings agreed with an earlier Canadian study in which confirmed COVID-19 infection was only observed with a Ct of 24 or less, and a symptom-onset-to-test time of under 8 days.

What this means is that PCR testing using a Ct of greater than 25 is unreliable. And, as Fauci himself admitted, positive results obtained using a Ct count of 35 or more are essentially worthless.

COVID-19 testing has also repeatedly shown itself to be prone to contamination. Incidences of false positives from all around the world have been reported thanks to contaminated test kits and equipment and botched testing procedures.

In one Spanish case, contamination caused 27 false positives. They probably would've gone unnoticed, if not for the fact one positive belonged to a doctor who ordered a retest.

In Cyprus, the health minister issued an apology after 26 people from 30 screened and deemed positive for the virus after arriving at Paphos airport, tested negative a day later.

In Massachusetts, a company with a history of screw-ups botched COVID-19 tests at its Massachusetts laboratory, leading to around 300 flawed results at nursing homes across the state. The spate of false positives cost some nursing homes tens of thousands of dollars, reduced levels of available staff and sent panic rippling through employees and residents.

Events like this that produce a simultaneous batch of false positives can lead to unfounded "super spreader" and "second wave" fears and serve as a ready excuse for the reintroduction of tyrannical lockdowns.

The current COVID-19 testing regime is a complete farce. It is carried out using methods that health authorities know full well will lead to a huge number of false positives.

Which is the whole point. COVID-19 is the Trojan Horse being used to justify the implementation of global totalitarianism, which the World Economic Forum has dubbed The Great Reset and insists is for our own good.

To convince the masses that surrendering their freedom is for the greater good, the largely inconsequential COVID-19 must be inflated and exaggerated to extreme proportions.

As the Spanish group Doctors For Truth announced upon its formation, COVID-19 is a false pandemic created for political purposes, "a world dictatorship with a sanitary excuse.”