Australia, which has proudly become the new North Korea by indefinitely banning its citizens from leaving, has to date recorded 910 deaths in people with COVID-19. The overwhelming majority of these deaths occurred in elderly people with multiple comorbidities.

The Federal Health Department’s website admits the median age of those dying with COVID-19 in Australia is 86 years.

That means those dying with COVID-19 in Australia lived, on average, over 2-3 years longer than the country's estimated life expectancy.

In order to eradicate a virus so 'deadly' it allows people to live past the national average life expectancy, Australians have been subject to police brutality, unlawful arrests and harsh fines, lockdowns, business closures, mask mandates, and severe limits to funeral and wedding gatherings. A new surveillance-state QR check-in system has been introduced, and those who don't scan it every time they enter a shop risk being heavily fined by police, who apparently don't have enough real crime in drug-fucked Australia to attend to.

In South Australia, the penalty for not letting Big Brother know you just entered a shop is $1,060. To place this in perspective, in 2018 a jazz musician by the name of Matthew Allen Harkins raped a fellow student at Mt Gambier, in the state's south east. Despite pleading guilty, on 5 August 2020 Harkins was allowed to walk out of court without serving a single day in jail.

He did not even receive a criminal conviction or suspended sentence.

His only penalty was a two-year, $5,000 good behaviour bond, which was a complete joke: Harkins was returning to his home in the US, where the South Australian good behaviour bond carries no legal weight whatsoever (the travel ban doesn't apply to expat rapists). The chances that he will ever need to cough up the $5,000 bond, therefore, are non-existent.

Harkins, in effect, escaped with no penalty whatsoever. 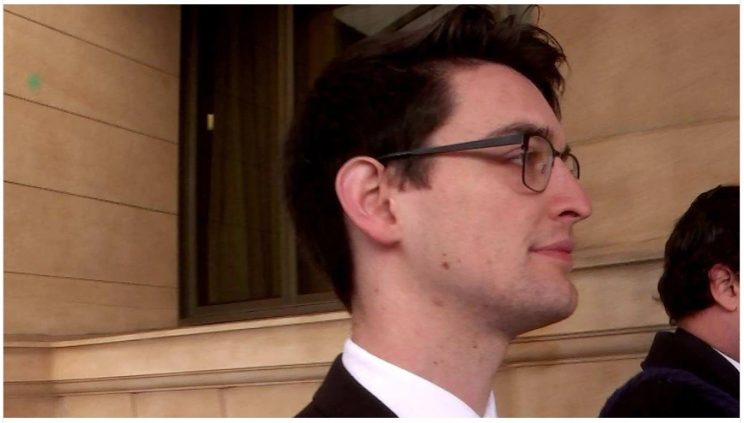 Matthew Allen Harkins got away with rape.

Yep, welcome to Australia (a.k.a Ausfailure, Asstrailer, Auscatraz), where failing to scan a useless "CovidSafe" QR code every time you enter a business is considered a bigger crime than rape. No wonder this sick joke of a country is riddled with rapists and pedophiles.

It's enough to make you want to leave Australia far, far behind you and start a new life somewhere less feral, degenerate and totalitarian.

Except that you can't.

You see, in order to stop a virus with a 99.85% survival rate, the fake country of Australia has been transformed back into a prison island, with outbound international travel banned - even to those wishing to visit dying parents or to marry their overseas fiances.

Fellow inmates of HM Prison Australia, I hope you are enjoying week 59 of "two weeks to flatten the curve." 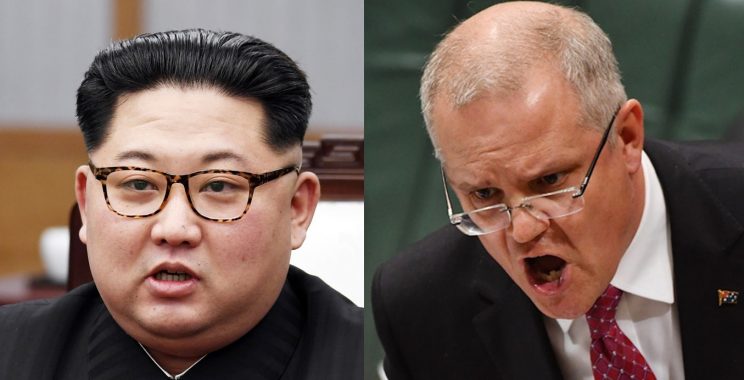 Kindred Spirits: Australia, whose national anthem absurdly claims "We are one and free," now takes pride of place alongside North Korea as having the world's strictest travel restrictions.

All this to eradicate a largely harmless and asymptomatic virus, even though the Australian Biosecurity Act 2015 explicitly states Australia is not to aim for zero biosecurity risk, but a very low level of risk (which, in terms of COVID, Australia already has).

But since when did Australia ever abide by rule of law? Since 1919, when it signed the Treaty of Versailles, Australia has been masquerading as a sovereign nation, all the while bearing a constitution imposed by a foreign power during colonial rule. Australians are subject to the laws of a country that legislated back in 1971 to declare citizens of Australia (and the other colonies) were not British citizens, nor British subjects, nor British residents, and that they had no entitlements under British law.

Furthermore, as a member of the United Nations, the supposedly sovereign state of Australia should not be enforcing laws imposed by a foreign power, unless mutually and explicitly agreed to by Australia and the UK in a treaty (no such treaty exists).

The Australian government, of course, isn't too keen for people to know this, which is why in 2017 its political enforcers, the Australian Federal Police, went around to bookstores pulling copies of a book that lays out the whole charade in detail.

Those of you from non-Commonwealth countries, especially with legal training, are probably shaking your head in disbelief, but it's true. The average Australian, however, wouldn't have a clue what I'm talking about and wouldn't care anyway. People in this country tend to struggle conceptually with anything unrelated to shopping, alcohol, homoerotic ball sports, and Married at First Sight. 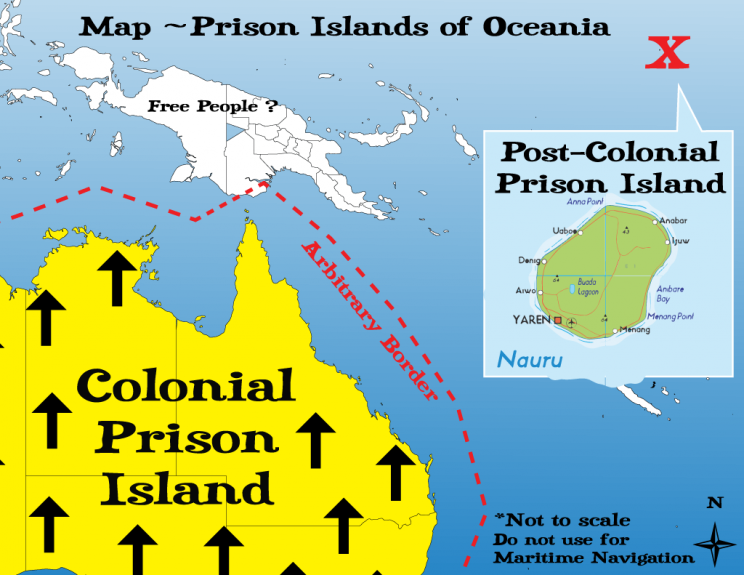 In stark contrast to their self-promoted image as a rugged, hardy people, a lot of Australians are docile, compliant characters who have thoroughly succumbed to the relentless fear campaign. Combine this with the insular country's inherent racism and distrust of foreigners, and you have a lot of people who seem to be quite ok with border closures and being treated like sheep.

Australians who believe it is crucial for the government to destroy people's livelihoods and actively stoke an increase in depression, self-harm and suicide rates in order to prevent a virus with an infection fatality rate of 0.15% should consider the following facts:

- Australia is one of the most sparsely populated countries in the world. Granted, much of its population is concentrated in urban centers, but it nevertheless has a miniscule population of 25 million on a land mass slightly smaller than mainland US and China. Australia also has a much lower rate of high-density (apartment) living compared to many US cities and most European countries.

- It is an isolated country completely surrounded by water. You can cross as many borders within the continent as you like, but you are still in Australia.

- The spread of COVID-19 began accelerating during the summer of 2019-2020. At this time, Australians were enjoying a seasonal peak in sunlight (vitamin D) exposure and hence natural immunity.

- It does not have the family culture of countries like Italy and Spain, where the elderly are revered instead of considered a burden. Interaction with elderly family members - the group most susceptible to COVID and other influenza viruses - is far more frequent in Mediterranean cultures.

- While tourism is (was) a significant sector in Australia, the country hardly qualifies as heavily visited. Out of 190 countries, Australia ranks 96 in terms of international inbound tourists per capita. Due to its highly antisocial COVID response, that ranking will no doubt fall even further if and when the borders are ever re-opened.

In 2008, Australia had only 265.91 international arrivals per 1,000 people. To place this in better context, the corresponding figures for some COVID-19 'hotspots' are shown below:

These differences are amplified when you consider Australia's small population size. The United States, for example, has a relatively low per capita international tourist rate of 190.7 per 1,000 people - but has an almost thirteen-fold greater population.

What this all means is that, while our gloating bureaucrats publicly pat themselves on the back for 'containing' the virus with their highly destructive and inhumane lockdowns, the real praise goes to factors unrelated to any of their measures.

Because of its small population and isolation from the rest of the world, Australia is a low-risk country and was highly unlikely to ever become a COVID 'hotspot.'

The Spanish Flu: Lockdowns & Masks Didn't Work Back Then, Either

Unlike the pre-orchestrated and absurdly overblown COVID-19, the Spanish Flu outbreak of 1918 was a genuinely deadly influenza. The first case arrived in Australia in October 1918, and by early 1919 it gained a foothold in the country.

During 1919, over 12,000 Australians died. Around half those deaths occurred in New South Wales.

Soon after the outbreak, on 28 January, the NSW Government took its first steps in attempting to contain the spread of the disease, beginning with the closure of all “libraries, schools, churches, theatres, public halls, and places of indoor resort for public entertainment.”

This was followed on 30 January by a trifecta of proclamations: People were required to wear masks covering the mouth and nose; the congregation of people in public spaces was disallowed; and restrictions were placed on crossing from Victoria into NSW.

More restrictions were added in February 1919, including the the closure of racecourses and hotels (so typical of Australia: Shut down libraries, schools and churches first, then close pubs and horse racing later).

Public meetings were banned. Medical practitioners were given powers to restrict the movement of individuals, especially those who had come into contact with infected patients. Fines of £20 or more were applied to those in breach of the new restrictions.

The strategy did not succeed.

Not only did it fail to stop the flu outbreak from running its course, but the economic impact of the restrictions created the need for relief and support programs.

The impact of the proclamations, especially prohibiting public meeting, and restricting travel, was seen by some to have been excessive. The Medical Officer of Health for the Hunter District, Dr Robert Dick, voiced that opinion in his report of 1920, noting the measures were largely ineffective in reducing the spread of the pandemic. Only those who were inoculated experienced a less severe attack of the disease, and a lower death rate – yet were still not less likely to contract the disease, he said.

So it was established 100 years ago that this lockdown, stay-at-home, mask-wearing charade was ineffective. All it achieved was to create a need for relief welfare programs as a result of the economic devastation caused by such restrictions.

Yet here we are, 100 years later, doing the same freedom- and soul-destroying nonsense because a bunch of pedo-friendly, rape-enabling, sexual degenerates pretending to be leaders and health experts demand it.

The commander of this effort is a misogynistic creep who, when asked to comment on Pamela Anderson's plea urging him to consider bringing Julian Assange home to Australia and treating him humanely once he got here, sneered:

"I've had plenty of mates who have asked me if they can be my special envoy to sort the issue out with Pamela Anderson.”

Yep, the best the uncouth Morrison could do in response to Anderson's heartfelt plea was to brag how a bunch of his dickhead friends would love to gang bang her.

You're in great hands, Australia.