The leftist liars at the Gates- and Soros-backed fact-fudge website PolitiFact have quietly withdrawn a September 2020 'fact check' that labeled a Hong Kong virologist’s claim that COVID-19 originated in a lab as inaccurate and a “debunked conspiracy theory.”

The fact check appeared after Hong Kong virologist Dr. Li-Meng Yan stated on Tucker Carlson’s show that not only was COVID-19 a man-made virus created in a Wuhan lab, but was also released intentionally by the Chinese government.

Yan appeared on Carlson's show on 15 September 2020. "I work[ed] in the WHO reference lab, which is the top coronavirus lab in the world, in the University of Hong Kong. And the thing is I get deeply into such investigation in secret from the early beginning of this outbreak. I had my intelligence because I also get my own unit network in China, involved [in] the hospital ... also I work with the top corona[virus] virologist in the world," she said.

Fox News previously reported on Yan in July 2020, when she blew the whistle on China's alleged attempts to suppress information about its handling of the virus. With a vast network of contacts in Chinese medical facilities, Yan attempted to gather more information about the virus as China blocked overseas experts from conducting research in the country. Her revelations fueled ongoing complaints that the Chinese government failed to tell the world early on about the virus' threat.

Yan, who said she was one of the first scientists in the world to study the novel coronavirus, fled China and currently fears retaliation. She was allegedly asked by her supervisor at the University/WHO reference lab, Dr. Leo Poon, in 2019 to look into the odd cluster of SARS-like cases coming out of mainland China at the end of December 2019.

After fleeing to the US, Yan promptly became the target of left-leaning Big Tech and mainstream media outlets. After a grand total of only 2 days and 3 tweets, the highly censorial Twitter suspended her account. 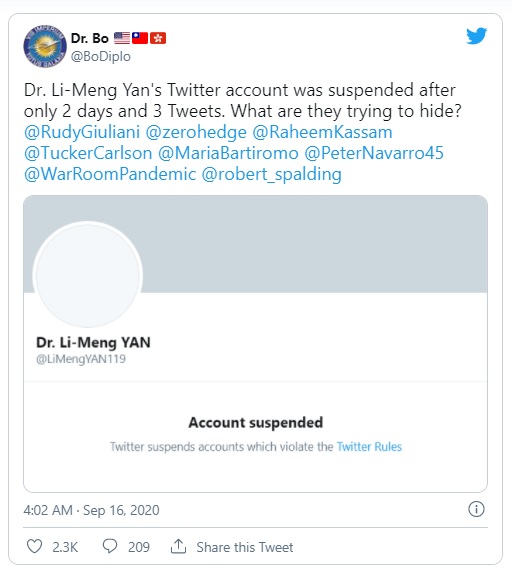 In February 2021, the Jeff Bezos-controlled Washington Post ran a he-said-she-said piece attempting to diminish Yan. The Post's primary strategy was to belittle Yan for using preprint site Zenodo to publish a paper on COVID-19. Given that using preprint servers is commonplace, especially in the hysterical we-need-to-have-this-published-yesterday COVID era, it was a pretty weak angle of attack. Yan had originally posted the paper to well-known preprint site bioRxiv, but upon checking 48 hours after making her submission, the site appeared to have gone offline, Yan said. Fearing the worst, she withdrew the paper and uploaded it to Zenodo.

In its attempt to discredit Yan, the Post also quoted such stalwarts of scientific impartiality as Stefano M. Bertozzi, whose past claims to fame include directing the HIV and tuberculosis programs at the Bill and Melinda Gates Foundation. He was the last director of the WHO Global Programme on AIDS and has also served on governance and advisory boards for the China-friendly NIH, the Chinese-controlled WHO and the Gates-funded Global Fund.

The Post also quoted Bertozzi's notorious buddy, Robert Gallo, who it laughably described as "a renowned AIDS researcher and a titan within the field of virology." The Post is talking about the same guy who loudly proclaimed by press release in 1984 to have discovered the AIDS virus, when in reality it was a virus sent to him from France the year before.

It took seven years and a scientific misconduct investigation before Gallo acknowledged the virus was first identified in a French lab. The charge of scientific misconduct against Gallo was dropped on appeal, even though Gallo acknowledged "that the analytical methods he used gave an inflated impression of the differences between the AIDS viruses in the three samples tested and the one from France" (Pasteur Institute scientists said Gallo's virus was identical to a fourth sample they sent to his lab in 1983, but Gallo and and his former chief virologist and co-defendant, Dr. Mikulas Popovic, pulled a SAPOL and claimed it could not be located).

Gallo's laboratory seemed to suffer what could politely be described as honesty issues. Whilst he was under investigation, two of his long time aides were charged with criminal dishonesty offences; one was found guilty of embezzlement, the other of accepting illegal gratuities from a company that supplied goods and services to Gallo's laboratory.

And so joining this intelligence-insulting parade against Yan was oligarch-funded PolitiFact, whose archived version of its 'fact check' now contains the following preamble (my comments added in red text):

"Editor’s note, May 17, 2021: When this fact-check was first published in September 2020, PolitiFact’s sources included researchers who asserted the SARS-CoV-2 virus could not have been manipulated (we simply repeated what the 'experts' said, even though many of those so-called experts, like Fauci and the authors of the Nature article we cited, were talking nonsense). That assertion is now more widely disputed (no-one with a functioning brain still believes the virus came from a wet market). For that reason, we are removing this fact-check from our database pending a more thorough review (we'll let this article die a quiet death and hope people eventually forget it). Currently, we consider the claim to be unsupported by evidence and in dispute (we can't bring ourselves to admit we got it wrong). The original fact-check in its entirety is preserved below for transparency and archival purposes (hopefully it will go unnoticed by those pesky skeptics). Read our May 2021 report for more on the origins of the virus that causes COVID-19 (please click on another link and leave this page now, the embarrassment is starting to hurt)." 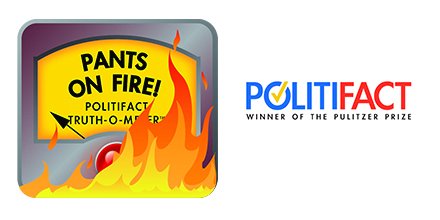 Yep, these goofballs have won Pulitzer Prizes - proof that anything really is possible.

PolitiFact has retracted the story in the face of renewed media attention on the link between Anthony Fauci's National Institute of Allergy and Infectious Diseases, EcoHealth Alliance and the Chinese Wuhan Institute of Virology.

Fauci approved millions of dollars in grants (US taxpayer money) to the Wuhan lab, which was well known to be experimenting with bat coronaviruses. Rather than directly pay the Wuhan lab (owned by the CCP), the money was first sent to EcoHealth Alliance, a NY-based NGO.

EcoHealth, after skimming a nice cut for itself, then forwarded the grant money to the Wuhan lab.

I wrote about all this in detail in June last year.

I give PolitiFact a "Disingenuous Dimwits" rating of five piles of bullshit.