The brain-numbing TV shows you watch.

The cleverly concocted advertising designed to make you feel inadequate and insecure if you don’t purchase whatever overpriced and unnecessary load of shit is being peddled.

The media’s exploitation of your love of celebrity gossip, your need to see people rise to stardom then come crashing down as they implode under the weight of public scrutiny – you jokers really get off on that shit, don’t you? Gives you so much to talk about and allows you to pontificate and unleash your inner moralizer (never mind that you yourself have a lot of ‘history’ you wouldn’t for a minute like to see plastered all over the headlines).

The excess alcohol you drink. Yep, keep up that steady flow of toxins to your brain – intoxication helps you forget what a crap, empty, subservient life you really live. It also helps you ‘relax’ and mingle with/hit on/annoy/physically assault your fellow morons!

The brain- and body-destroying illicit (and legal) recreational drugs you take despite their long and appalling safety records, simply because popular culture and your equally stupid peers tell you to.

The political partisanship, eagerly promoted by the media and the parties themselves, in order to give you the illusion of choice and obfuscate the reality that both sides of politics are dominated by self-serving and dishonest sleazeballs whose primary mission is to ensure you remain dumb, misinformed and obedient taxpayers. I must hand it to them, they’re doing an absolutely outstanding job of this.

The ‘social’ media phenomenon, which is turning you lot into an increasingly shallow, vain and narcissistic pack of fucktards. Shit, the bullshit ‘selfie’ trend is getting so out of hand people are now risking their lives in their quest to take the ultimate photo of themselves:

Dear morons: Stop with this barrage of fucking selfies, you’re simply not that good-looking. Seriously!

The constant fear-mongering by governments, who know that when you are scared by some real or fabricated (usually the latter) threat you are even more likely to follow the firm, reassuring voice of your ‘leader’. This makes it even easier for governments to pass legislation that strips away even more of your freedoms and makes it even easier for the military-industrial complex, whose business is killing your fellow humans, to keep those monstrous profits rolling in.

You people are well on your way to becoming the most self-obsessed, shallow, narcissistic, gullible, consumerist fuckwits the planet has ever known. 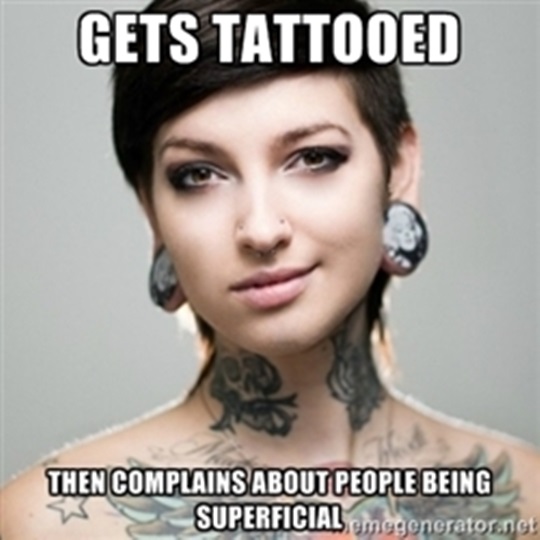 Now go back to eating your bullshit 30 bananas a day “I got hospitalized for hyperkalemia!”/ketogenic “I’m so happy my energy sucks and breath stinks because it means I’m in ketosis!”/intermittent fasting “I starve all day then eat like an out-of-control slob in a 3-hour window at night because experiments with lab mice show this increases levels of something called ‘heat shock proteins’!”/vegetarian and vegan “a diet that is woefully deficient in vitamin B12, retinyl palmitate, carnosine, carnitine, creatine, and taurine is healthier!”/Paleo “I don’t eat anything that my Stone Age ancestors didn’t eat, except for beef, chicken, pork, lamb, modern vegetable and fruit cultivars, whey protein, and Bulletproof coffee! Yep, pretty much my whole fucking diet would’ve been alien to my Paleolithic forebears, but walking around in a Crossfit t-shirt and telling everyone I eat a “Caveman” diet makes me feel hardcore!”

Be sure to keep arguing about LDL particle size, heat shock proteins, whether or not you should eat carbs after 6pm, whether you should take the glyco-acetylated-esterified form of vitamin C or the methyl-carboxylic-fuck-a-duck version, and all that other largely useless bullshit you spend hours upon hours debating on web forums and blog comments sections. What the overwhelming majority of you sedentary slobs need to do is STOP EATING MORE CALORIES THAN WHAT YOU EXPEND and TURN OFF THE FUCKING COMPUTER AND DO SOME FUCKING EXERCISE.

Of course, you jokers don’t want to hear plain commonsense recommendations like that. They’re “boring” and imply that you need to take some responsibility for your own condition and actions. Nope, in this day and age where everyone likes to believe they are a poor fucking victim, we can’t have that.

You, the people, have spoken, and you want lies, bullshit, gimmicks, pseudoscience, unrealistic but evidently enticing promises, and loud-mouthed assholes that lie, slander, contradict themselves at every turn, and make an absolute fortune on the back of your endless gullibility and stupidity.

Your leaders and gurus couldn't be more proud of you.

Anthony Colpo is author of The Fat Loss Bible

and Whole Grains, Empty Promises. However, don't read these books if you are a moron, because you will be exposed to stuff you just don't want to hear. All your favourite bullshit myths will be smashed to pieces, and you'll also be exposed to effective non-hyperbolic recommendations derived from scientifically valid facts. Geez, who needs that kind of cognitive discomfort? Especially when there are so many pseudoscientific charlatans out there peddling novel-sounding bullshit to capitalize on your laziness and your unquenchable desire for novelty and instant gratification!