No, this is not a book about speed cameras or radars. It is the story of one of the most infamous and controversial moments in Olympic history, retold by a key figure who was right there in the midst of all the chaos.

Some of you youngsters might not remember it, but 1988 was a hallmark year in international athletics. It was the year of the Seoul Olympics, where muscle-bound Canadian Ben Johnson absolutely smashed the field and the (then) world record to take gold in track and field's most prestigious event, the 100-metre sprint.

Three days later, Johnson was stripped of his medal, his time and ultimately his career after it was announced he had tested positive for the banned anabolic steroid stanozolol.

Johnson was hardly the first athlete in Olympic history to test positive for banned drugs and lose his medal. Nor was he the only athlete at the 1988 games to do so; three other athletes were also stripped of their gold medals after testing positive for banned substances.

But while most of these other cases received little publicity, Johnson's fame and his epic win over arch-rival Carl Lewis prompted an orgiastic media feeding frenzy when his positive result was announced. The subsequent media-driven hatefest marked the first time in history an athlete caught using a banned substance was subjected to the kind of global derision usually reserved for only the most notorious of murderers, paedophiles and war criminals.

This appalling trend continues to this day, although I've never been able to extract a coherent explanation from anyone as to why people taking drugs to run or ride faster should receive the kind of public vilification most cold-blooded killers will never be subjected to. I can only assume the spectacle of watching successful athletes fall from grace allows people the gratifying sensation of (self-perceived) moral superiority and the opportunity to rationalize away the physical superiority of these athletes as simply being due to drug use (and not the countless hours of hard and systematic training they perform on a daily basis).

Among the "I-told-you-so!" commentators in 1988 was Carl Lewis, who received the gold medal after it was stripped from Johnson. But as it turns out, six of the 8 runners in that fateful 100m final were eventually implicated in doping 'scandals' - including the high-and-mighty Lewis who, it was later revealed, tested positive for stimulants at the US Olympic trials.

But in 1988, it was Johnson who bore the full brunt of the frenzied, front-page global scorn (the other finalists no doubt thanked their lucky stars it wasn't them).

The race that forever changed the world of sport. Note how Johnson raised his arm in victory before crossing the finish line, a source of consternation to coach Francis who knew his protege could have clocked an even faster time had he kept his arm down a tad longer.

Thanks to the hysteria stirred up by the media, 1988 heralded the era in which anabolic steroids - easily among the safest and most healthful pharmaceuticals when used judiciously - came under far more intense scrutiny. It heralded a change in the legal and medical attitude towards these drugs; doctors were sternly instructed not to prescribe them to patients for muscle-building or performance purposes, and your stereotypical steroid dealer - often a fellow lifter who sold "gear" on the side to finance his own anabolic use - began abandoning what was quickly becoming an all-too-risky endeavour. As doctors and casual dealers were forced out of the arena, organized crime eagerly moved in to fill the vacuum, bringing with it counterfeit drugs that were often inert, contained other drugs not listed on the label, or tainted with harmful contaminants.

The media, true to its usual muck-raking form, portrayed Francis as an evil, syringe-wielding villain. The truth is Francis was a generous, mild-mannered guy and a brilliant coach, one who only introduced his athletes to performance enhancers when it became clear to him the overwhelming majority of the world's top track and field athletes were using them. 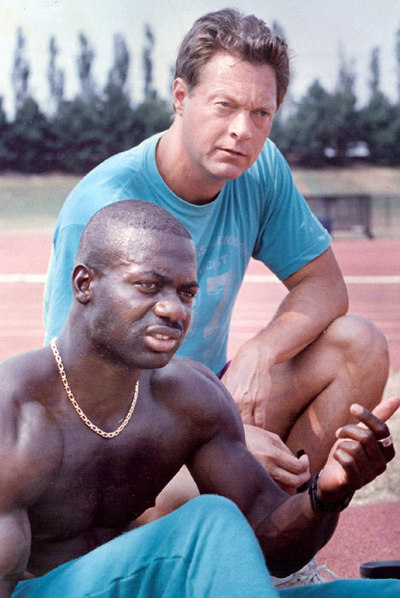 , you'll learn the true story behind Ben Johnson's rise to stardom. You'll meet the shy, stuttering kid who showed no recognizable aptitude for sprinting, but kept doggedly showing up for training at Francis' club any old how. The kid who practiced his sprinting in beat-up basketball shoes, because he couldn't afford runners.

Thanks to Francis' detailed and enthralling narrative, you'll feel like you're right there alongside Johnson as his talent starts to emerge and he blossoms into a world-class sprinter. You'll feel the highs and lows as he battles with his arch-nemesis, Carl Lewis, the loud-mouthed primadonna who derides Johnson every chance he gets.

You'll be swept away in the exhilaration of Johnson's epic win in Seoul, followed by a Ground Zero view of the emotional devastation that sweeps over Johnson, and the Francis camp, when he tests positive.

In amongst the high drama and intense training, there are plenty of light-hearted moments as Francis recalls Johnson's fairy-tale rise from zero to hero. The kid who once couldn't afford running shoes suddenly finds himself with plentiful money, fame, sports cars, and a steady procession of women - including the female manager of one of Johnson's rivals who deliberately sleeps with him in order to tire him out before a race against her client the next day. It doesn't work: Johnson nails her (literally) and the subsequent race with ease.

But Speed Trap is far more than a riveting story that takes you on an unforgettable emotional roller-coaster ride. As one highly astute Amazon reviewer noted, "the reader is treated to perhaps the best education on the technical aspects of sprinting ever put into print."

The book is two biographies in one, and a learn-by-example sprint-training instruction manual. Before being introduced to Johnson, readers learn about Francis's own athletic career as a sprinter. He recalls his early training with Percy Duncan and Harry Jerome, then his instruction under legendary sprint coach Gerard Mach. As Francis' own competitive endeavours drew to a close, he began synthesizing all he had learned, developed his own coaching methods, and became an accomplished coach of several world-class sprinters. Francis forged one of the world’s leading sprint teams, his runners setting 250 Canadian records, 32 world records and winning 9 Olympic medals.

Speed Trap describes the continued evolution of Francis' methods as his athletes moved onto the world stage. You'll also get a candid outline of his athlete's drug regimens, which were surprisingly modest (your average pro bodybuilder would take more drugs in a month than what Francis' athletes took over their entire careers...)

You'll marvel at Francis' abilities as a coach, the way in which he dissects every 10 metres of the world's most famous Olympic event and explains the mechanics behind it with such detail, you could be forgiven for thinking each segment were a major event unto itself. If you thought the 100-metre sprint involved little other than running fast for 9 seconds then turning left, you'll gain a whole new appreciation for the immense amount of mastery involved - there's a heck of a lot going on in that short but intense sub-10-second period.

Even if they're not into running, anyone involved in explosive/power sports or strength training should get themselves a copy of this book; they'll likely discover numerous aspects of Francis' training approach that have carryover to their own endeavours.

Here's the best news of all: Speed Trap is now available in Kindle format. The original hard copy went out of print long ago, which meant those who wanted to read this outstanding book had to hunt around for a second hand copy. I'm guessing popular demand prompted someone to re-release Speed Trap in electronic form, which means you can now be reading it within minutes for less than $10.

If you're a sports fan or take your power-strength training seriously, then get yourself a copy ASAP - you won't regret it.