The quality of the clinical trial data for the Pfizer 'COVID' vaccine is, to put it kindly, absolute garbage.

One could literally write a book about the farcical 'evidence' for Pfizer's pseudo-vaccine, but here are some of the more egregious flaws.

The Trial Duration Was Ridiculously Short

We have been incessantly told the Pfizer, Moderna and AstraZeneca drugs were Thoroughly Tested!™, but the truth is they were given "emergency use authorization" after only two months of clinical trial research. For a new class of drugs based on a technology with a long track record of dismal failure (as per the Pfizer and Moderna mRNA drugs) or no track record whatsoever (as per the AstraZeneca viral vector drug which contains a chimpanzee adenovirus mated with the protein sequence for what is allegedly the Sars-Cov-2 spike protein), that is an absurdly short and wholly inadequate duration.

The Data Appears to Have Been Manipulated

On 10 December 2020, the US Food and Drug Administration's Vaccines and Related Biological Products Advisory Committee met to discuss the Pfizer-BioNTech COVID-19 Vaccine. The briefing document is available here, and it contains some interesting figures not included in the main paper published in NEJM. I'm specifically referring to page 18 of the document, where you'll find a table with exclusion and dropout information (I've reproduced the relevant section below).

In any large clinical trial, participants will drop out for various reasons. Others will be removed by the researchers for non-compliance. This is normal and to be expected.

What is not acceptable is when researchers exploit this phenomenon in order to skew the results in favour of their sponsor's/employer's drug.

Which appears to be the case with the Pfizer trial.

A similar number of subjects in the drug and placebo groups were excluded from the study for not receiving all their vaccination/placebo shots within the required time frame - as one would expect in a randomized study.

However, 311 Cominarty subjects were excluded from the study for unnamed "other important protocol deviations," but only 61 in the placebo group. No explanation was provided for this striking difference. 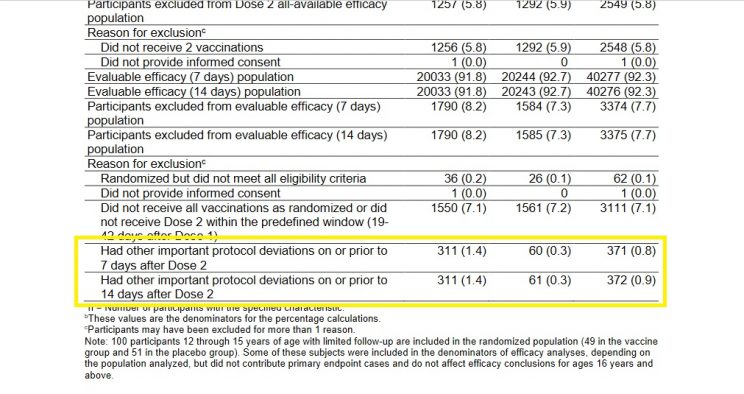 Suspicious exclusion data from the Pfizer trial: The figures in the left-hand column are for Cominarty, those in the middle are for placebo, and those to the right are the combined totals.

When Peter Doshi, associate editor of BMJ, pointed out this glaring anomaly earlier this year, his critics countered that the 311 mysteriously withdrawn subjects comprised "less than 1% of the study population and can therefore hardly have influenced the study outcome."

Either these critics were being disingenuous, or simply had no clue what they were talking about - because the total number of people diagnosed with COVID-19 in the study was also less than 1% of the total study population.

Given the company's long history of fraud and criminal dishonesty offences, it's a possibility we simply cannot rule out.

When calculating the efficacy of Cominarty in preventing COVID-19, Pfizer conveniently ignored "suspected" COVID cases. If included in the study analysis, these cases would have rendered the difference in COVID infection between drug and placebo groups meaningless, even when using the time-honoured relative risk ruse (for a full explanation of the relative risk sham, and how it was used to greatly exaggerate the alleged efficacy of the COVID-19 'vaccines,' see here).

Including symptomatic COVID-19 cases in the trial that were not PCR confirmed would have produced a relative risk reduction of 19% which, as Doshi noted, is far below the 50% effectiveness threshold for authorization stipulated by the FDA.

The Pfizer results, in other words, were derived from using only a tiny portion of potential COVID-19 cases.

In any clinical trial, the most telling and definitive data is overall mortality. It's relatively easy to manipulate the figures for disease incidence and even cause of death, but overall mortality is far less amenable to "subjective" interpretation: If a patient is dead, they're dead.

Therefore, when overall mortality figures are manipulated we are almost certainly looking, not at 'creative reinterpretation,' but straight up fraud.

Which means Pfizer has some serious questions to answer.

The "life saving" drug we'd incessantly been told was "95% effective" in fact produced one more death compared to saline placebo.

But on 8 November 2021, we learned the real difference was even greater. In a document justifying its unjustifiable decision to approve Comirnaty, the FDA wrote that, as of 13 March 2021, there were 21 deaths in the Comirnaty group and 17 in the placebo group.

Using the relative risk calculations preferred by drug companies and the FDA, this means Comirnaty conferred a 24% increased risk of mortality during the brief study period.

Why didn't Pfizer reveal those figures back in July? It can't claim time constraints, because it had since 13 March to get the figures in order.

What else is Pfizer hiding from us? How do we know there are not further deaths still being concealed by the serial fraudster?

The Trial Was Inexplicably Unblinded Way Ahead of Schedule

Incomplete death figures were not the only thing Pfizer posted on 28 July 2021. That same day, the company casually revealed it began unblinding the trial way back in December 2020.

Participants who had been randomized to placebo were unblinded and offered BNT162b2. Those who took up the offer were then followed in "open-label" fashion.

By dismantling the double-blind trial at such an early juncture, Pfizer was sabotaging the ability to gather longer-term double-blind clinical trial data on the efficacy and safety of its mRNA clot shot.

We are told ad nauseum that double-blind randomized clinical trials are the "gold standard" of clinical research. Nothing less, we are repeatedly told, is acceptable when testing new drugs.

Yet here was Pfizer hurriedly dismantling the only double-blind trial of its new COVID 'vaccine.'

It could hardly be a lack of funds: Pfizer, a company with a $289 billion market capitalization, is swimming in money thanks to its mRNA pseudo-vaccine; the company reported $11.3 billion in revenue from the shady new drug in the first half of 2021 alone.

Nor can Pfizer even begin to claim it disbanded the blinded trial for 'ethical' reasons. In a trial where its 'vaccine' group was suffering a higher death rate, the company can hardly claim it unblinded the trial out of ethical concern for the control subjects.

Given Pfizer's long and well-documented history of fraudulent behavior, we are faced with the distinct possibility the trial was unblinded for unethical reasons, most likely to stop the death trajectory in the vaxxxine group diverging even further north from that of the control group.

Brook Jackson is a trained clinical trial auditor with over 15 years’ experience in clinical research coordination and management. In September of last year, she was employed by Ventavia Research Group, a contractor that was running the Texas arm of Pfizer's 'vaccine' trial at several sites in that state.

Upon commencing her new role as regional director, she was shocked by what she saw.

Jackson told The BMJ that, during the two weeks she was employed at Ventavia, she repeatedly informed her superiors of poor laboratory management, patient safety concerns, and data integrity issues.

Jackson told The BMJ that the company falsified data, unblinded patients, employed inadequately trained vaccinators, and was slow to follow up on adverse events reported in the pivotal phase III trial. Staff who conducted quality control checks were overwhelmed by the volume of problems they were finding.

Exasperated that Ventavia was ignoring the problems, Jackson documented several of the matters by taking photos on her mobile phone. Ventavia executives later questioned Jackson for taking the photos.

After repeatedly notifying Ventavia of these problems without success, Jackson emailed a complaint to the FDA.

The FDA did nothing in response to Jackson's complaint. In August of this year, the FDA published a summary of its inspections of Pfizer's phase III trial. They looked at just nine out of the trial's 153 sites, and did not look at any of Ventavia's operations. Further, no inspections were conducted following the December 2020 emergency authorization of the 'vaccine.'

And Pfizer? Instead of firing Ventavia, Pfizer has contracted with the company for four other vaccine clinical trials since Jackson lodged her complaint to the FDA in September 2020!

And as of this writing, Ventavia's website is still encouraging readers to register their interest for participation in future Pfizer 'vaccine' trials.

Only the Guilty Have Something to Hide

Pfizer could help settle the many doubts about the conduct of its clinical trial by simply making the data publicly available. The drug giant, however, isn't in a sharing mood. The data-sharing section in its trial protocol stated "Pfizer will make available data from these trials 24 months after study completion."

Given that the (constantly changing) study completion date is currently listed as 2 May 2023, this means the data will not be released until at least 2025 - four years away! And even then, Pfizer will be very careful about who it releases the data to. As its data sharing section further states:

"Data requests are considered from qualified researchers with the appropriate competencies to perform the proposed analyses. Research teams must include a biostatistician."

Pfizer itself will decide who has the "appropriate competencies" to scour through its potentially embarrassing data. Only research "teams" with a presumably qualified biostatistician will be allowed to access the data, a stipulation that conveniently excludes capable but solo independent researchers (the type most likely to be free of industry bias) from casting their critical eyes over the data.

Pfizer also states in no uncertain terms it will not provide the data to individuals requesting access for "legal purposes."

What are you afraid of, Pfizer?

The FDA Gets In On The Act

On 15 November 2021, the pharma-friendly FDA confirmed who it really works for when it asked a federal judge to give it until the year 2076 to fully release the documents in its possession regarding the approval of the Pfizer-BioNTech COVID-19 vaccine.

The FDA has repeatedly assured us throughout this vaxxxine charade that it has "a commitment to ensuring full transparency," but as any veteran FDA-watcher can tell you, the agency's real commitment is to its wealthy Big Pharma benefactors.

So when medical transparency group Public Health and Medical Professionals for Transparency (PHMPT) filed a Freedom of Information request for the documents, the FDA promptly dropped all pretense at "full transparency." It told the group, comprised of researchers and academics from some of America's most hallowed universities, it could have the information - but only in bite size pieces, spread out over the next several decades!

PHMPT then filed a lawsuit in order to force the FDA to hand over the documents in a far more timely manner. In response, the sleazy and corrupt FDA told the court it had 329,000 pages of documents responsive to the FOIA request and proposed releasing 500 pages per month to allow for redactions of exempt material.

At that rate, the FDA would fully release the records in question in just under 55 years.

“The FDA’s promise of transparency is, to put it mildly, a pile of illusions,” wrote Aaron Siri, whose firm is representing PHMPT in the lawsuit.

“It took the FDA precisely 108 days from when Pfizer started producing the records for licensure to when the FDA licensed the Pfizer vaccine,” Siri continued. “Taking the FDA at its word, it conducted an intense, robust, thorough, and complete review and analysis of those documents in order to assure that the Pfizer vaccine was safe and effective for licensure. While it can conduct that intense review of Pfizer’s documents in 108 days, it now asks for over 20,000 days to make these documents available to the public.”

So the question remains: Just what are Pfizer and the FDA hiding?

If they have nothing to hide, and the data for Comirnaty is all above board, why are they making it so incredibly difficult for interested parties to view that data?