Until May this year, Neil Ferguson (above) was one of the chief architects of the UK government's stay-at-home strategy and a prominent member of the Scientific Advisory Group for Emergencies (SAGE), which spearheads the UK's coronavirus response.

As head author of the 16 March 2020 bombshell Imperial College-WHO report predicting rampant death and mayhem, Ferguson was instrumental in igniting the world’s monumentally destructive response to COVID-19. He and his co-authors predicted that, by August 2020, the novel virus would kill 2.2 million in the US and 510,000 people in the UK unless drastic lockdowns were imposed.

The report was instrumental in plunging, not just the UK, but much of the world into harsh lockdowns.

And it was all a sham.

The so-called 'science' Ferguson used to make his Armageddon forecasts was, like so much agenda-driven computer modeling, a complete load of bollocks.

Johan Giesecke, the former chief scientist for the European Center for Disease Control and Prevention, called Ferguson’s doomsday report “the most influential scientific paper” in memory. He also says it was, sadly, “one of the most wrong.”

Jay Schnitzer, an expert in vascular biology and a former scientific direct of the Sidney Kimmel Cancer Center in San Diego, said of Ferguson: “I’m normally reluctant to say this about a scientist, but he dances on the edge of being a publicity-seeking charlatan.”

The admittedly erratic Elon Musk was in lucid form when he called Ferguson an “utter tool” who does “absurdly fake science.”

Indeed, Ferguson has been wrong so often that some of his fellow modelers call him “The Master of Disaster.”

Ferguson was behind the disputed research that sparked the mass culling of eleven million sheep and cattle during the 2001 outbreak of foot-and-mouth disease.

In 2009, a government estimate based on Ferguson’s advice said a “reasonable worst-case scenario” was that swine flu would lead to 65,000 British deaths. In the end, swine flu killed 457 people in the UK.

Last March, Ferguson admitted that his Imperial College model of the COVID-19 disease was based on undocumented, 13-year-old computer code intended to be used for a feared influenza pandemic, rather than a novel coronavirus.

Ferguson declined to release his original code so other scientists could check his results. When he finally released a heavily revised set of code at the end of April, it was roundly attacked by coding experts as “totally unreliable” and a “buggy mess."

David Richards, co-founder of British data technology company WANdisco said "we would fire anyone for developing code like this and any business that relied on it to produce software for sale would likely go bust."

"So the real scandal," says National Review's John Fund, "is: Why did anyone ever listen to this guy?"

The answer to that question is that the oligarchical puppet-masters behind this whole COVID-19 sham needed someone they could rely on for some alarmist figures.

But in the end, having friends in high places wouldn't save Ferguson from some major public embarassment.

However, it wasn't Ferguson's rampant pseudoscience that led to his undoing.

I'm Too Sexy For This Lockdown

If Ferguson really believed in his doomsday COVID-19 predictions and the importance of lockdowns, you'd think he'd take the virus and the physical distancing restrictions pretty seriously.

On Tuesday 5 May 2020, he resigned after it was revealed he had broken social distancing rules to meet his married lover, leftist campaigner Antonia Staats.

Ferguson, 51, allowed Staats, 38, to visit him at home during the lockdown while lecturing the public on the need for strict social distancing to halt the spread of the deadly virus.

The first of Staat's visits, on Monday 30 March, coincided with a public warning by Ferguson that the one-week-old lockdown measures would have to remain until June.

She made a second visit on 8 April despite telling friends she suspected her husband, an academic in his 30s, had symptoms of COVID-19.

Ferguson is understood to be living apart from his wife Kim, 54. They married in 2004 and have a teenage son. His estranged wife is the daughter of a respected Oxford deputy headmaster and lives in a £1 million townhouse (jointly owned with Ferguson) in the fashionable Jericho district of Oxford, an area beloved of the town’s liberal elite. 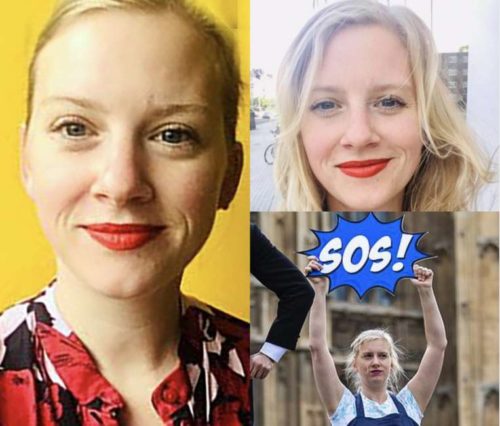 Staats (above) is married to an academic in his 30s who works at the School of Oriental and African Studies (SOAS) in London, where she gained a masters in Asian politics. She lives with him and their two children at a £1.9 million home.

The couple are understood to be in an open marriage - not a very COVID-preventive arrangement.

Her and "Lockdown, Pants Down, Steps Down" Ferguson met on the online dating site OKCupid.

The German-born Staats is a senior campaigner for US-based Avaaz, a George Soros-backed online activist petition site (along with Sum of Us).

Those of you who have ever signed an Avaaz or Sum of Us petition for a worthy cause, will have noticed a subsequent stream of emails asking you to "add your voice" to petitions pushing an array of leftist causes célèbre such as anti-Trumpism, fighting COVID "disinformation," pushing the anthropogenic climate change gospel and increased censorship of contrarian material on social media.

Two weeks before the UK was plunged into lockdown, Staats and her left-wing colleagues implored the general public: "Stay at home." Everyone, the group declared, should "avoid unnecessary close contact and stay at home when we can." More than half-a-million signed up to the online pledge.

Staats reportedly told friends she did not believe her and Ferguson's actions to be hypocritical as she considered their separate households to be one.

Ferguson and Staats, like so many other pampered left-wing elitists, earnestly seem to believe they are entitled to follow a different set of rules than the rest of us.

In 2010, the WHO revealed the names of 16 experts and advisors on its emergency committee which recommended the declaration of the Swine Flu pandemic – five of them having had links with the pharmaceutical industry.

One of whom was Ferguson, who had declared to the WHO consultancy fees from GlaxoSmithKline, Baxter, and Roche - the manufacturers of the Swine Flu vaccines and medications.

As film-maker Lilian Franck noted in her 2018 documentary “TrustWHO”: “Not a problem for the WHO.”

Incredibly, after all the harm that he and his fellow alarmists have caused with their wildly inaccurate pseudoscience, Ferguson remains unrepentant. Instead, the wealthy epidemiologist feels sorry for himself.

He recently complained to a TV presenter about receiving hate mail, and said “As a scientist who has been quite prominent at times in the epidemic for me and people like me it has been, at times, very difficult."

“Some people like to have bogeymen to blame for things and if you’re one of those people it’s an uncomfortable situation to be in."

Well cry me a river, Neil. No mention from you of the worldwide increase in self-harm, suicide, depression, anxiety, domestic violence and unemployment caused by your beloved lockdowns, which are nothing if not egregious violations of fundamental human rights. No mention of the economic devastation these disgraceful house arrest schemes have wrought on developed countries, and the increased starvation and decimation of health services in already struggling developing countries.

You're a real piece of work, Neil.