My search for the ultimate road bike saddle has been a long and arduous one. Unlike some of my friends, who seem to be able to jump on any bike and ride 150 kilometres without issue no matter what the saddle, yours truly has one very fussy undercarriage.

In 2012, I thought my problems had been solved by the ISM Adamo, the unique dual-nosed saddle borne from a collaboration between ISM and Jon Cobb:

Unfortunately, as the months wore on, my right knee started to get worn down by the widened stance forced upon it by the Adamo's broad nose section.

And so then I tried another brainchild of Jon Cobb, the Cobb V-Flow Plus, which featured a slimmer nose than the Adamo. Again, the short-term results were highly favourable:

The V-Flow honeymoon came to end not long after I watched a documentary about Aussie track cycling phenom Anna Meares, which showed footage of her pumping out single-leg presses. Inspired, I bought a leg press machine for my own home gym. The results were almost immediate: My single-leg poundages quickly increased and within weeks I was giving away my slimmer-fitting jeans thanks to a rapidly expanding thigh girth.

The awesome and inspirational Anna Meares doing stuff in the gym that puts most guys to shame.

Some of you probably already know where this is going. As my upper thighs laughed in the face of the "thigh gap" craze and began closing ranks, riding with the Cobb V-Flow Plus quickly became a welt-inducing nightmare. While the Plus had a slimmer nose section than the Adamo, it was still noticeably wider than most traditional road saddles. And now there simply wasn't enough space between my upper thighs to accommodate the saddle's wider-than-standard snout.

Ugh. Back to the drawing board ... again.

What followed was a lengthy and sometimes painful journey to find a suitable repclacement. The saddle I ended up settling with is, in my opinion, nothing short of amazing. But before I reveal the very special saddle that now adorns all my road rigs, let's take a quick look at some of the other saddles I tried: 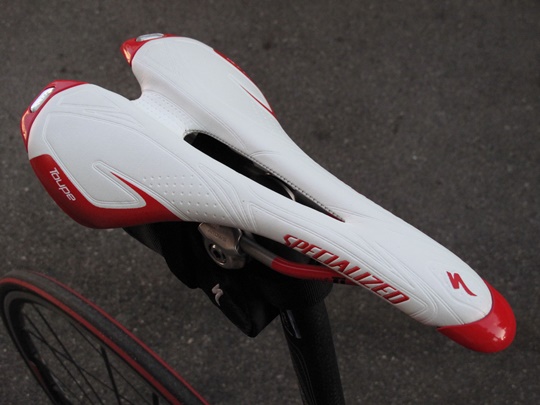 Specialized Bicycle Components has developed a large range of gear under the Body Geometry (BG) banner, highly touted for its anatomical correctness. The Toupe (since superseded by newer models), was highly popular several years ago. I tried the 143mm version and was underwhelmed. Even on relatively short rides, I could feel my sit bones more than what I wanted to. It wasn't painful, but it wasn't particularly comfortable either. It didn't stay on my bike long before being pulled off and flipped on eBay. 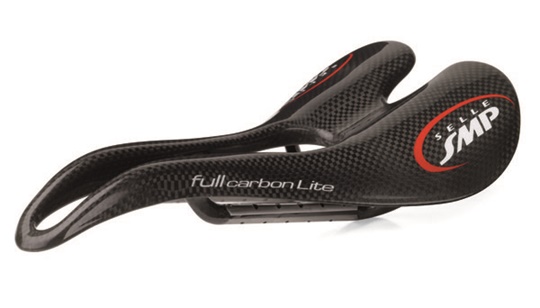 Lured by its futuristic design and light weight, I once tried to ride from Bright to Mount Hotham on this thing. It was an experience I will never forget, and for all the wrong reasons. I made it a third of the way up the mountain before my screaming ischial tuberosities (sit bones) forced me to turn around and head back home. And during the return journey I had to stand up and coast whenever I had the chance in an attempt to quell the pain. The misery continued for another two days, with my ischium reminding me what a dumb bastard I was every time I sat down on something with insufficient padding.

While the SMP Full Carbon Lite was absolute murder to my hard bits, admittedly the hollow channel running down the middle of the saddle was highly accommodating towards my more tender baby-making bits. Maybe the padded versions of this saddle would constitute a more comfortable overall package, but I don't care: I now get traumatic flashbacks just looking at any of the SMP range.

I came upon these after an Internet search, and decided to take a punt on the "Xsilite"-railed Team version that you see above. The open design, combined with a groove that runs the full length of the saddle, allowed for a pretty comfortable ride. They weren't perfect in terms of comfort, but up to this point the Aspide Open

was the best comfort-to-weight prospect I'd come across. Longer rides still caused mild grumbling in the sit bone area, but nothing I couldn't cope with, so I ended up buying a few more. They'd probably still be on all my bikes if it wasn't for the stunner that's about to feature next.

And now, ladies and gentlemen, I would like to introduce you to the best road saddle you've never heard of ... 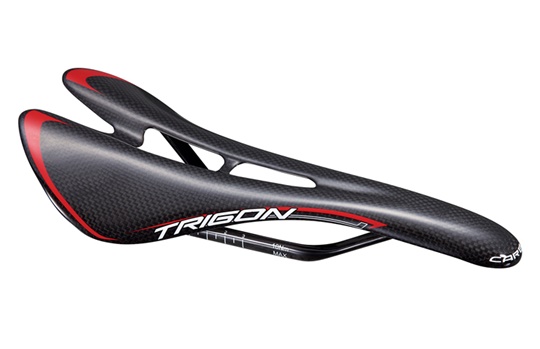 Trigon have been around for years, but aren't nearly as well known as they should be. Emanating from the modern-day epicentre of the bicycle world, Taiwan, they have a quiet reputation as a manufacturer of high-quality carbon bicycle components. Until recently, my personal experience with Trigon was limited to using one of their lightweight seatposts (which performed flawlessly). For what it's worth, one of the guys at my local bike shop bought himself a Trigon frameset several years back, and was more than happy with it.

I accidentally stumbled upon the VCS06 while searching around on the Internet for super light bicycle saddles. When I read this well-considered review in which the author described the VCS06 as "one of the most comfortable saddles I’ve ridden" despite weighing an insanely light 77 grams, my interest was immediately piqued.

Don't get me wrong: After my experience with the SMP Full Carbon Lite, I couldn't help but remain skeptical a full carbon saddle could indeed be so comfortable. However, based on my previous experiences with Trigon as a quiet, no-BS manufacturer of quality gear, and the built-in flex technology that the saddle purportedly featured, I decided to give the VCS06 a go.

To say I was amazed by this saddle is an understatement. If you'd forecast just a year ago that in 2015 I'd declare a full carbon saddle as the most comfortable road bike perch I'd ever used, I likely would've told you to lay off the silly juice.

Well, it's true. I can't believe how comfortable this thing is, especially considering the complete lack of padding. It's even more comfortable than the San Marco Aspide, which I attribute to two things:

-The VCS06 features a curved platform, in contrast to the flatter platform seen on most road saddles, including the Aspide. For guys with thick or muscular legs, this is likely to be extra helpful, as the gently sloping edges of the saddle won't rudely jut into your upper thigh.

-The forgiving nature of the saddle shell. All that talk about built-in flex isn't just a load of marketing hoopla - the VCS06 really does have lots of built-in 'give'. While the rock-hard carbon of the Selle SMP would probably allow you to club an unwanted intruder senseless, the VCS06 features a much thinner and more flexible shell. Keep the SMP next to your bed, and put the VCS06 on your bike.

Perhaps the only 'flaw' I've identified so far is the same one the aforementioned reviewer noted; the saddle can be a little slippery at first, although this seems to diminish once you get used to it (it also seems to be more pronounced with some bibshorts than others). To counter this property of the saddle, one of the things I did was position the saddle with the nose nearly as high as the tail. I was worried this would uncomfortably compress my manly bits but, surprisingly, even on long rides hasn't caused any problems.

Sometimes, about 30-40 minutes into a ride, usually as I'm starting up a hill, I'll feel my sit bones a little on the VCS06, but another 10 minutes later the feeling seems to vanish, and I've never had any ischial pain or soreness later on in the day or the next morning.

This saddle has been a delightful surprise in every possible way.

And did I mention it only weighs 77 grams? As in a genuine, verified-on-my-own-scales 77 grams?

That's insanely light, especially for a saddle that is actually comfortable over long distances.

The best thing of all about the Trigon VCS06 is its price. I'm not sure about the availability of these in bike shops, but right now Amazon is selling them for US $198.00

. For a saddle of this calibre, that's a true bargain. As a point of comparison, the 119-gram sit bone-smashing SMP Full Carbon Lite retails for around $750.00. San Marco's super light version of the Aspide, the "Superleggera

And unlike a lot of weight-weenie offerings, there's no rider weight limit with the sturdy VCS06.

All up, this saddle is superb. Trigon, in their usual no-nonsense manner, has truly hit a home run with the VCS06. Obviously, saddle compatibility is a highly individual affair but this beauty gets my vote as the best all-round road bike saddle on the market.

If you want to try one for yourself, then click here.

Verdict: Brilliant. Ridiculously light, surprisingly comfortable, and reasonably priced. What more can a weight-weenie ask for?

Before I sign off, a quick word about seatpost compatibility. Like many carbon saddles, the VCS06 uses 7x9mm rails, so you'll need a compatible seatpost/clamp set-up. I personally use Bontrager's lightweight XXX posts (5mm setback, usually flipped around to accommodate my 'cleats back, seat forward' position on the bike), combined with Bontrager's lightweight 7x9mm "Red" clamp kit that you can purchase separately here (from the dropdown list, select "Complete clamping assembly (lightweight) for 7x9mm saddle rails- Red"). Oh, and plenty of carbon paste to keep everything sitting right where it should be. This makes for a very light and functional set-up.

Disclaimer: The author has no relationship whatsoever with any of the component manufacturers listed in this article except as that of paying customer. The author received no remuneration from any manufacturer for this review and all saddles mentioned in this review were purchased at the author's own expense.