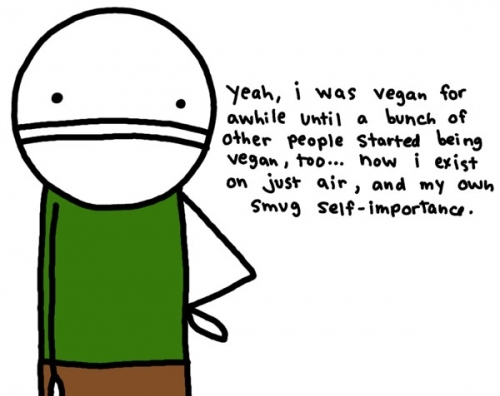 If you thought the vegan movement was overpopulated with oddballs...you're right. Tom Billings has compiled an alarming catalog of raw vegan lunacy, which can be read here:

Investigating Raw Vegan and Other Diet Gurus: Can You Trust Them?

It's a shocker. Learn how people have died shortly after attending the health retreats of well-known raw vegans and how vegan 'gurus' frequently make false claims and lie about their true eating habits.

Despite the raw vegan movement's frequent wanking on about being 'ethical' and in 'harmony with nature', it appears to have ongoing issues with fraud, in-fighting, plagiarism, recreational drug use, promotion of bogus products, and bigotry.

Threats and slander are not confined to meat- and cooked food-eating outsiders; raw vegan gurus are not above hurling slander and even threats of violence at each other in a pathetic attempt to maintain the upper hand.

Raw vegan and serial attention-whore Harley "Durianrider" Johnstone also gets a few mentions as well, for allegations of welfare fraud and physical threats against fellow vegan David Wolfe. The latter filed a lawsuit against Johnstone for infringement of copyright and libel.

Unfortunately, you can't outlaw stupidity. If you could, I'd file my own massive lawsuit, not against diet and health gurus, but all the idiots who succumb to their absurd claims. Without an audience, these 'gurus' would be forced to crawl back under whatever rock/banana skin they emerged from and live the lives of anonymity and mediocrity they so fully deserve.

People, stop being so gullible, for chrissakes...

Update May 22, 2012: Yesterday I was contacted by Harley "Durianrider" Johnstone, angrily demanding I remove mention of the allegations of welfare fraud that appear in Tom Billings' article. You can read the subsequent exchange between Johnstone and yours truly here: https://anthonycolpo.com/?p=3617