If you would prefer a traditional black type/white background view of this page, click on the little green icon to the left.

For Maria Strydom and her husband, Robert Gropel, climbing Everest while adhering to a strict vegan diet was their “own personal Everest.”

The 34-year-old Strydom, a lecturer at Monash Business School in Melbourne, Australia, had a message she wanted to share with the world: Veganism is not a handicap.

She and her husband, a veterinarian, both stuck closely to the rigorous diet required by vegans — no animal products whatsoever — for which they experienced criticism. Some thought they didn’t receive enough iron and protein in their diet for such strenuous physical activity.

“It seems that people have this warped idea of vegans being malnourished and weak,” Strydom said in an interview on the Monash Business School’s blog. “By climbing the seven summits we want to prove that vegans can do anything and more.”

Those “seven summits,” refer to the highest peak on each of the seven continents.

“I had a foreboding, a bad, feeling,” Kurt Gropel told the Sydney Morning Herald. “I said, ‘I don’t want you to go’ — they weren’t very happy about that.”

“Everest is a killer,” Kurt said. “There are 200 corpses up there that decorate the path. They are all people who thought they could go up and down.”

But the couple felt prepared.

“A very experienced guide in Alaska once told us that of all the things you can regret once you are on the mountain, you will never regret overtraining,” Strydom said before the climb. “It is also important to get experience spending long periods on a mountain.”

Despite their thorough preparations and previous climbing experience, Everest proved unscalable for the couple. They reached Camp 4, the final camp, at 3,000 feet below the summit, before suffering altitude sickness. It caused fluid build-up in Strydom’s brain, which killed her Saturday. Gropel, alive but fighting fluid build-up in his lungs, had to be taken down the mountain by sled, the Sydney Morning Herald reported. He was taken to a hospital in Kathmandu, Nepal.

Heinz Gropel, Robert’s father, told the Australian that Robert will probably recover, at least in the body.

“Physically he’s OK, we think,” Heinz said. “Mentally he is a mess. He’s just lost his wife. These guys were not amateurs, they were ­experienced climbers.”

Strydom was one of three climbers seemingly in the primes of their respective lives — one has to be to scale Everest — to have succumbed the mountain’s many dangers since Thursday. 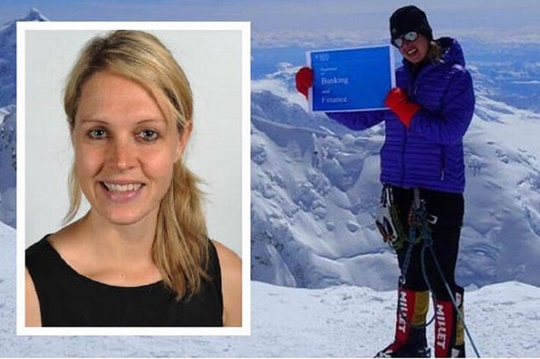 The latest, according to the Associated Press: Subhash Paul, an Indian climber who had fallen sick and was being helped down the mountain by Sherpa guides when he died overnight. “It is not clear what happened,” expedition organizer Wanchu Sherpa, of Trekking Camp Nepal, told CNN. “We believe the weather suddenly deteriorated at some point, and the team lost direction.”

Two other members of Paul’s team, Paresh Nath and Goutam Ghosh, are now missing, CNN reported. “We are trying to communicate with other expedition teams around that level to locate the missing climbers,” Gyanendra Shrestha of the Nepal Tourism Department told CNN.

Meanwhile, about 30 more climbers have become sick, frostbitten or both near the summit during the past few days, the AP reported.