All around the world, a reliable pattern is emerging: Once a country begins rolling out the so-called COVID-19 'vaccines,' its rate of new COVID-19 infections rises dramatically.

As I have stated repeatedly, these new 'vaccines' are not vaccines, and they don't prevent COVID-19.

Stop Calling Them Vaccines. Because They're Not.

A vaccine is an inoculation in which you receive a weakened or inactivated version of whatever pathogen you're trying to protect yourself against. None of the Bizarre New World drugs at the centre of the 'vaccine' rollout fall into this category. Many people seem to think the Oxford-AstraZeneca drug is a traditional-style vaccine, but nothing could be further from the truth. The Oxford-AZ concoction does not contain attenuated Sars-Cov-2; rather, it's a chimpanzee adenovirus encoded with the protein sequence for the COVID-19 S-protein.

The Pfizer and Moderna mRNA drugs contain messenger RNA also encoded for the COVID-19 S-protein. Their alleged mechanism of action is, quite frankly, alarming. While a true vaccine prompts the formation of antibodies, the mRNA drugs first prompt the body itself to manufacture the Sars-Cov-2 spike protein. In other words, they trigger your own cells to manufacture part of what we are repeatedly being told is the deadliest virus in the history of everything!

This is unprecedented. And incredibly reckless.

As I explained at length back in February, mRNA technology has repeatedly proven a dismal failure in drug development trials. In fact, until this COVID farce, no mRNA drug had even made it to the Phase III stage of clinical testing - which, under normal circumstances, must be successfully completed before a drug can be submitted for regulatory approval.

The mRNA drugs were finally allowed to market courtesy the combined smokescreens of global hysteria and "emergency use authorizations" that conveniently by-passed the normal drug approval requirements.

So to all you people bragging on social media that you got your vaccine shot ... stop it, because you got no such thing. As you're about to find out, what you really got is shafted.

Before the non-vaccines even hit the market, the compliant media was trumpeting tantalizing efficacy figures. Clinical testing, we were told, showed the vaccines offered between 67-95% protection against COVID-19.

To concoct these headline-worthy figures, the drug companies and their obedient researchers had to ignore the overall infection rates in drug and placebo groups. Instead, they resorted to the time-honoured "relative risk reduction" ruse, which involved ignoring the tens of thousands of trial participants who remained infection-free in each group (I explain in detail how this scam works here).

Back in April, a group of still-sane researchers pushed aside the relative risk charade and calculated the actual difference in infection rates between drug and control groups in the 'vaccine' trials.

They ranged from a pathetic 0·84% for the Pfizer–BioNTech mRNA drug, to a similarly pathetic 1·3% for the AstraZeneca–Oxford drug.

In previous articles, I've explained how even these miniscule figures are an overestimate, because the trials were an easily-manipulated farce. Most of the AstraZeneca trials were single-blind, with researchers knowing who got the vaxxxine and who didn't. The one trial that was double-blind (South Africa) failed to find any protection for the so-called 'vaccine.'

The data from the supposedly double-blind Moderna trial was in fact openly available to a team from Moderna. And the Pfizer trial gives all indications of having being heavily manipulated. Among the numerous suspicious anomalies present was an inexplicably largely number of 'vaccine' subjects that were excluded from the trial for unnamed reasons. It's a glaring anomaly that demands an explanation, but Pfizer is stubbornly refusing to share the raw data until the trial is over in 2023, when it will already have made tens of billions of dollars from the sale of Comirnaty.

This is an audacious scam, folks.

And Now, the Global Failure that is the 'Vaccine' Rollout

If the purpose of the vaccine rollout was to make big money for Big Pharma and its corrupt lackeys in government, then it's clearly been a huge success.

If the purpose of the rollout was to injure and kill people, it's also been a resounding success, judging by the unprecedented number of adverse event and death reports being received in the US, UK, Europe and Australia.

But if the true purpose of the 'vaccine' rollout was to prevent COVID-19, then the whole things is proving to be a monumental failure.

All around the world, the vaccine rollout is being accompanied, not by plummeting COVID-19 case numbers, but a sharp spike in cases.

Let's start with Iceland, one of the most heavily vaxxxinated countries in the world. As you can see from the chart below, the overwhelming majority of the population has been jabbed. In the older age groups, their are near total vaxxxination rates.

So, if the vaccines are 67-95% effective, Iceland should be absolutely kicking the crap out of COVID-19, right?

As the chart below shows, Iceland's mass-vaccination has been followed by a sharp spike in COVID-19 cases.

And before some genius attempts to blame the tiny portion of unjabbed residents for this (as politicians all around the world are doing in their respective countries), take a look at the graph below. It shows that the overwhelming majority of new cases are in vaccinated folks:

Don't go blaming foreign visitors for this, either, because most of the infected arrivals in Iceland have also been 'vaccinated.'

And no, Iceland is not using some home-grown brand of 'vaccine,' it's using the same junk the rest of us are being cajoled to take. The graph below shows the vaccine distribution in Iceland according to manufacturer.

Tell me again how this porqueria is 67-95% effective?

How's that working out for Singapore, I hear you asking?

The following figure, downloaded this morning from the Singapore Ministry of Health website, reveals a recent spike in cases: 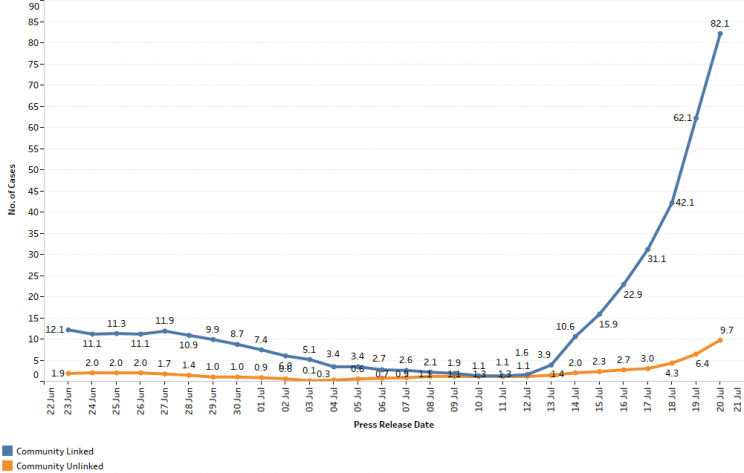 And the following graph breaks down local cases in the last 14 days by age and vaccination status:

Again, we see that the overwhelming majority of cases are in those who succumbed to the hysteria campaign and got vaxxxinated.

Here in Australia, the majority of people have yet to be vaxxxinated. This is not because Australians are a super-awake group who have carefully scrutinized the 'vaccines' and concluded they are unsafe - quite the opposite. Many people are literally begging to get injected, but they are up against a little something known as the Australian work ethic.

When you combine the Australian "she'll be right, mate!" attitude with the appalling lack of efficiency that characterizes governments in general, you end up with a whole other level of slow.

As a result, the 'vaccine' rollout here has progressed at a glacial pace, even after the Australian Government loudly boasted about buying 150 million doses of COVID-19 'vaccines'. Not only will this go down as one of the most dipshitted buying sprees in history, given there are only 26 million people in Australia, but no-one seems to know where all these 'vaccines' have gone.

If, per chance, anyone happens to stumble across the 138 million or so missing vials, I hear prime minister Scott Morrison would be really grateful for their safe return. Could you please place them in an Esky, and address the shipping label to:

Don't worry about the shipping cost, the government will cover it (it comes out of your taxes anyway).

Australia may not be the most vaxxxinated country in the world, but there are still millions more Australians walking around with a dodgey cocktail of spike protein and graphene oxide inside them compared to the start of the year. As of 24 July 2021, 11,140,511 clot shots have been administered, with 3,326,691 second doses given. 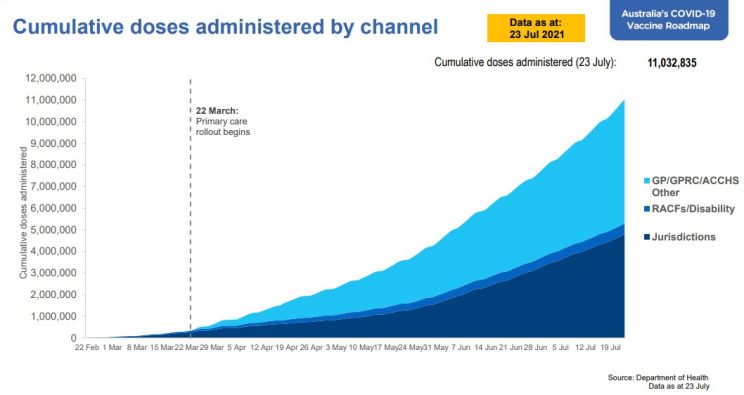 Once again, this should be accompanied by at least a small dip in the country's case numbers, right?

The exact opposite is happening.

Below is a graph of Australia's case numbers since January 2020, when the Woohoo virus made its official debut down under. Ignore the first two big spikes to the left, because they happened before the vaxxxines were unleashed. 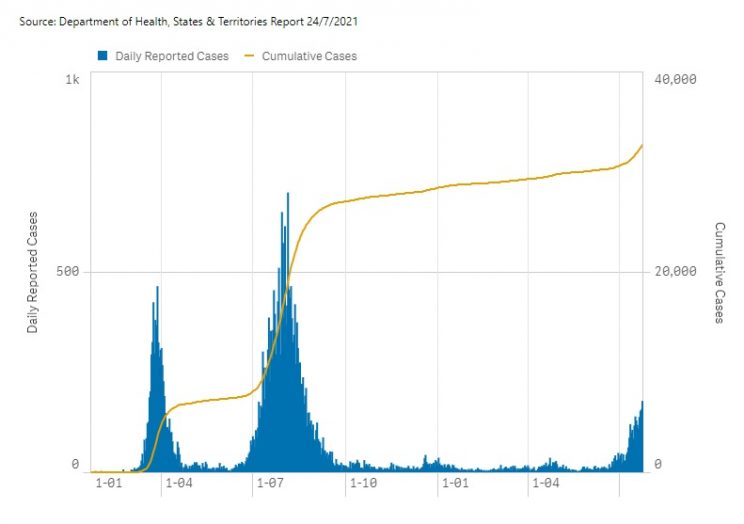 Once again, we see a vaxxxine rollout, followed by a spike in case numbers that belies all the Safe & Effective!™ hooplah.

I've been unable to locate a breakdown of infection rates in the vaxxxinated versus unmolested on the Australian Government website, and something tells me they are in no hurry to supply one.

At a press conference on Monday 25 July 2021, NSW Health bureaucrat Dr Jeremy McAnulty told the gathered press there were 141 people in NSW hospitals "with COVID" at present; 43 in intensive care, 18 on ventilators.

The real eye-opener came when he casually admitted all but one of these hospitalized patients were 'vaccinated.'

After his spiel, what appears to be a fellow bureaucrat prompted him to correct himself. McAnulty then stated what he really meant was that of the 43 patients in intensive care, 42 were not 'vaccinated' and the other patient had received one dose of 'vaccine.' No mention was made of the other 98 patients.

Something is smelly here, but it's hard to get a straight story from any of Australia's bureaucrats because they are, overwhelmingly, habitual liars.

But based on the case numbers, a similar situation to Iceland and Singapore seems to be playing out in Australia. As more people dutifully roll up their sleeves to get spiked, case numbers spike too. I don't know what's worse: The subsequent lockdowns, or the inescapable and utterly nauseating media bombardment of messages from ugly, prematurely-aged, unhealthy-looking people posing as health experts.

... followed by me reaching for a bucket and poor Ramone wishing he could call a vet for humans.

Shortly after posting this article, I received news that 49 fully vaxxxinated New Jersey residents have subsequently died with COVID-19. Not wanting to admit the vaxxxines are harmful, the NJ health department quickly put its own unique spin on the news.

The 49 deaths occurred among 4.8 million vaxxxinated residents, making the known death rate slightly greater than one in 100,000 fully vaccinated people.

“That means vaccines are about 99.999 percent effective in preventing deaths due to COVID-19,” said Dr. Ed Lifshitz, medical director of the department’s Communicable Disease Service.

Lifshitz is claiming, in all seriousness, that if they didn't get the vaccine, the remaining 4.8 million people had 100% chance of dying of COVID-19.

Lifshitz needs to hand in his medical license immediately, because he's either a complete idiot or a shameless liar. To claim that COVID-19 kills 100% of non-vaxxxinated people is simply insane.

This, folks, is the intellectual caliber of vaxxxine defenders.

To the vaxxxinated: Stop claiming you are doing your bit to "stop the spread" of COVID-19 and that the rest of us stubborn, selfish holdouts should do the same. The vaxxxines are not vaccines, they do not protect against COVID-19, and the alarming adverse event data clearly demonstrates they are wholly unfit for human administration.