On 21 October 2021, an article in Italian newspaper Il Tempo revealed that of Italy's 130,468 alleged COVID victims, only 3,783 were free of other health pre-existing conditions. This means the primary cause of death for at least 97% of Italy's alleged COVID victims could have been (and probably was) something other than an influenza virus emanating from Wuhan.

The revelation that only 2.9% of Italy's official COVID deaths involved people free of underlying health conditions spurned a flurry of articles citing the Il Tempo story, with headlines such as:

As you might expect, these articles in turn spurned a number of so-called rebuttals from the shameless propaganda units known as "Fact Check" websites.

The original Il Tempo article was inspired by the publication of a 21 July 2021 report compiled by the dozens of researchers comprising the "SARS-CoV-2 positive deaths surveillance Group," under the auspices of the Istituto Superiore di Sanità (Italian National Institute of Health, literally 'Higher Health Institute'). That original report is in Italian and can be accessed here.

The report did indeed show that most Italians whose deaths were attributed to COVID-19 in fact suffered multiple comorbidities. The figures quoted by Il Tempo were correct.

But to claim these figures prompted the Italian government to slash its offficial COVID death toll by 97% is optimistic to the extreme.

Governments are simply not that honest.

In this article, we'll take a closer look at the situation in Italy. Before I do that, let's look at the feeble attempts by USA Today and Italian commentators to downplay and obfuscate the true situation.

If Varcellone had simply stated the Italian government did not officially revise the COVID death toll downward, she would have been on safe ground. But of course, all niceties aside, the real job of 'Fact Checkers' is to defend leftist causes célèbre, not to debunk 'false information.'

And so Vercellone's piece in the left-leaning USA Today ventures beyond stating plain facts and transforms into another dubious defense of the Great Corona Con.

Among the 'experts' she cites is Graziano Onder, director of the Department of Cardiovascular, Endocrine-metabolic Diseases and Aging, who told another Italian newspaper, La Repubblica, that Il Tempo's interpretation of the ISS report was "all wrong."

"The reason for that increase cannot be the pre-existing chronic pathologies in many victims, which were equally widespread in previous years," he said. "That number tells the impact of the coronavirus in our country."

What it really tells is the destructive impact of Italy's 'response' to the Plandemic. Like most countries, Italy's government and media worked overtime to create fear and paranoia among the population. This resulted in a dramatic drop in emergency department admissions for common - and fatal - ailments like heart attack. Instead of getting their sorry asses to ICU, people suffering heart attack and other acute events figured they'd rather stay home and risk death, rather than go to hospital and risk catching a flu.

Making people too scared to go to the ICU for conditions that really are deadly; I wonder what that might have done to the country's mortality rate?

Given the fatality rate for an untreated heart attack runs at around 50% compared to an infection fatality rate of 0.15% for "COVID-19", well ...

Along with making the huddled masses too scared to seek medical help when they really needed it, Italy (like most countries) imposed strict lockdowns that severely curtailed exposure to several important health factors: Fresh air, exercise, sunshine, and human interaction.

It's called "regular" and "seasonal" for a reason - Italy (and the rest of the world) suffer influenza every winter. But now we're supposed to believe an influenza with an infection fatality rate of 0.15% is magically responsible for 100,000 extra deaths?

Onder and USA Today blissfully ignore all the above factors. Apparently, these facts weren't worth checking.

On 5 October 2021, the ISS researchers released an updated report. Perhaps due to the stir their original report caused in countries like the US, this new version was released in English.

Because this report is more recent and most of my readers hail from English-speaking countries, that's the one I'll focus on in this article. Let's begin dissecting the report by examining this statement which appears on page 2:

"The average age of weekly deceased persons has substantially increased up to 85 years (1st week of July 2020) and then dropped slightly."

So as of early July 2020, the average age of people allegedly dying of COVID-19 in Italy was 85 years. Remember, this was smack bang in the middle of a pandemic that we were repeatedly being told was decimating Italy.

To call the latter scenario a pandemic is charlatanistic bullshit of the highest order.

On 27 December 2020, Italy started 'innoculating' its population with the Brave New World COVID drugs that are fraudulently presented as vaccines. If COVID-19 is so deadly, and the new COVID drugs are so remarkably Safe & Effective!™ (as we have been told ad nauseum), then the average age of a COVID death should have increased even further.

But the exact opposite happened.

In other words, since the introduction of the clot shots, life expectancy among "SARS-CoV-2 positive deceased patients" in Italy has declined from above average to well below average.

But listen to how the researchers tried to spin this highly inconvenient observation:

"This reduction in the average age of deaths is likely a consequence of the protective effect of vaccinations in the older population given priority to vaccination."

And to to think Italy once gave us intellectual powerhouses like da Vinci, Michelangelo, Raphael and Galilei. Now it gives us anti-geniuses who ludicrously claim a class of dangerous new drugs is selectively preventing COVID and saving lives in elderly people.

All noble-sounding talk of prioritizing the elderly aside, promises to vaccinate all Italians over 80 by the end of March this year fell short. Just a third of Italy’s 7.3 million doses administered by late March went to people in that age group.

Strike 1 for the absurd argument that the vaxxxines are preferentially saving the lives of elderly Italians!

It is also worth remembering these anti-brains are talking about a class of drugs that, upon being rolled out, began mowing down elderly people all around the world, with cases in the Netherlands, Spain, Ireland, USA, Germany and England somehow evading the mainstream blackout on contrarian COVID news.

What's that, miei amici? These deaths were just a "coincidence" because elderly people in nursing homes often have multiple comorbidities and are near the end of their days, you say?

So let me get this straight: When elderly people with multiple comorbidities and a dodgey PCR result die after already having lived past the national average, we're all supposed to believe their advanced age and multiple underlying health conditions had nothing to do with it. Nope, it was definitely absolutely positively certainly "COVID-19", the influenza virus with an infection fatality rate similar to seasonal influenza.

But when elderly people keel over within minutes to days of getting a controversial drug made by corporate criminals, no way no sirree was it the shady new drug, noooooooo. It was their advanced age and multiple underlying health conditions!

Fatal blood clots and myocarditis, anyone?

Strike 2 for the dipshitted argument that vaxxxines are bravi bambini that love nonna and nonno more than anything else in da world! 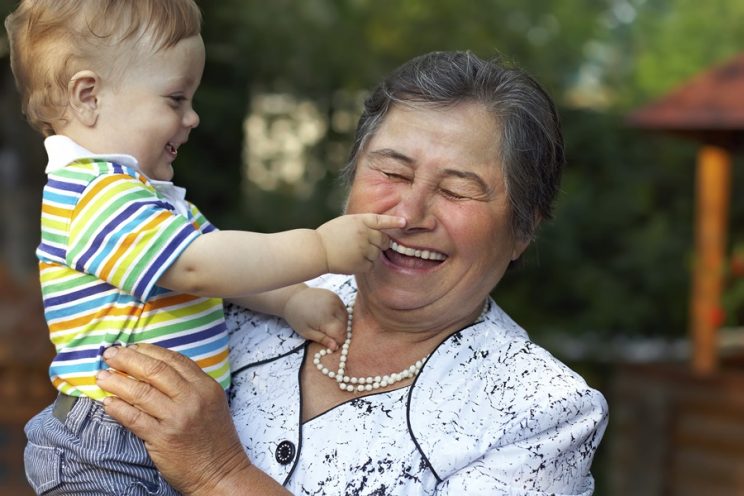 Unlike the pseudo-vaccines, grandkids are highly unlikely to kill you.

Then there's the very inconvenient fact that the COVID-19 pseudo-vaccines have never been shown to save a single life.

The only clinical trials examining these drugs were all conducted by their manufacturers. To trust corporate criminals like Pfizer and AstraZeneca, and aggressively entrepreneurial companies like Moderna, to present an honest and impartial examination of their own products is to demonstrate moron-level gullibility. In any other arena, we would consider this a massive conflict of interest. But for the last several decades, drug companies have been allowed to conduct their own clinical trials and, despite the countless clear instances of fraud and manipulation in these trials, modern medicine accepts and publishes the results in what has to be one of the most egregious emperor-has-no-clothes charades going.

Even pro-vaccine law professor Eugene McCarthy complained, without a hint of irony, in a 2019 paper:

"Pharmaceutical companies engage in a sophisticated system of fraud with regard to prescription drug research, marketing, and distribution. These companies face few, if any, repercussions for their fraudulent behavior."

Yet even with the abundant evidence of heavy manipulation and misconduct in the COVID 'vaccine' trials, their manufacturers still couldn't muster anything resembling valid evidence of reductions in COVID-19 transmissions and hospitalizations, and no evidence whatsoever of a reduction in deaths.

By the time the Italian researchers wrote their October report, it had been known for over two months that there was in fact one more clinical trial death in the Pfizer 'vaccine' group than the similarly-sized placebo grouup.

Then on 8 November 2021 came the further news that Pfizer had failed to record some of the deaths in its clinical trial. As it turns out, there were at least six more deaths in the Pfizer 'vaccine' group and another three in the control group. This meant that, compared to placebo, the Pfizer pseudo-vaccine conferred a 24% relative risk increase for overall mortality.

Strike 3 for the patently stupid claim that the COVID 'vaccines' are reducing mortality in elderly Italians!

Let's Sum This All Up, So I Can Take Ramone For a Walk

You have Italy, a country where people were strictly locked down and forced to endure social isolation, a lack of sunshine and a lack of exercise. A country where old people, who are more susceptible to the deleterious effects of seasonal influenza, were not only deprived of these important health factors but deliberately cooped up with other susceptible people suffering a lack of these same health factors.

You have a country in which there exists ample documentation that people were too scared to present themselves to emergency departments for serious and life-threatening conditions. There is no evidence for a miraculous mid-pandemic reduction in the prevalence of such ailments because, as Onder himself admits, "pre-existing chronic pathologies" were as "equally widespread" as in previous years.

That same country has also embraced the deadly new clot shots, which have established an unmistakable and irrefutable pattern around the world: After these drugs are rolled out, "COVID" hospitalizations and deaths skyrocket. An increasing number of whistleblowers are reporting that these so-called "COVID" events are really vaxxxine adverse events.

In a country of 60 million people, these factors could easily trigger an excess of 100,000 deaths.

A largely rebranded virus with an infection fatality rate of 0.15%, which is similar to regular seasonal influenza?

As for the Italian researchers who made the absurd assertion that vaxxxines selectively protect older people when all the evidence shows otherwise, I rate their claim "Totalmente Stupido" and award it 5 Stinking Piles of Stronzate.

I hope you all learned something from this, because my brain hurts from deciphering such twisted nonsense. If you enjoyed this article, discovered something helpful, or expanded your knowledge of foreign profanities, feel free to leave a tip.